India News | Govt to Bring Privilege Motion Against Trinamool MPs for 'misbehaving' with IT Minister, Seek Suspension of Santanu Sen

The government is planning to give privilege motion notice against Trinamool Congress MPs who "misbehaved" with Union Information and Technology Minister Ashwini Vaishnaw in Rajya Sabha, sources said on Thursday. 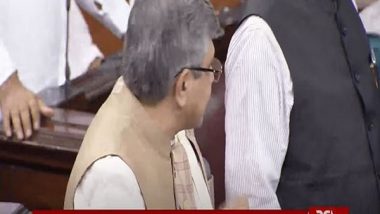 They said the government will also urge the chair to suspend Trinamool Congress MP Santanu Sen, who snatched the copy of Vaishnaw's statement from him and tore it into pieces in the upper House.

"The treasury benches will request the Chair in to suspend TMC MP Santanu Sen for misbehaving with IT Minister while he was reading the statement on 'Pegasus Project' report," a source said.

There was a verbal feud between BJP and TMC MPs after Sen snatched the statement from the minister. Marshals intervened to bring the situation under control.