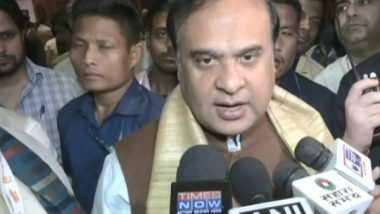 Speaking to ANI, the chief minister said the Gandhi family considers itself above the country and beyond this, Rahul Gandhi is engaged in breaking the country in the name of federalism.

"He is indirectly encouraging separatist elements by describing India as a federation of states," Sarma said.

"He (Rahul Gandhi) is saying that India is not a country, but an agreement of the states. He is promoting separatist sentiments by describing India as a union of states. There is no difference between his language and that of militant outfit ULFA," he said.

"If India is a union of states, then what will happen to 5,000 years old rich history? When the Congress called itself the Indian National Congress and held meetings all over India, was it meant as a union of states?" he asked further.

Sarma said that betraying the Gandhi family is seen as a betrayal of the country in Congress, while for the BJP, the country is paramount.

Meanwhile attacking All India Majlis-E-Ittehadul Muslimeen chief and Lok Sabha MP Asaduddin Owaisi who rejected the need for Uniform Civil Code in the country, Sarma said it will be in the interest of Muslims to close madrasas and implement Uniform Civil Code.