The CM-designate then visited the Doul Gobinda temple, he then sought blessings at the Kamakhya Temple. After that, he headed for the swearing-in ceremony. 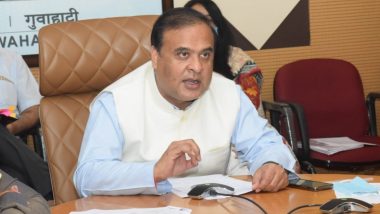 The newly-elected Chief Minister began the day by offering prayers and sought the blessings of the people of his constituency Jalukbari on a day when he will be sworn in as the next Chief Minister of the state. The oath-taking ceremony will take be held 12 noon today.

Himanta Biswa was elected unanimously by the Bharatiya Janata Party (BJP) Legislature Party, which met in Guwahati on Sunday. The CM-designate then visited the Doul Gobinda temple, he then sought blessings at the Kamakhya Temple. After that, he headed for the swearing-in ceremony. Who Is Himanta Biswa Sarma? Here's All You Need to Know About The New Assam Chief Minister.

The swearing-in ceremony will to be attended by BJP National President J P Nadda and many other leaders of the party as well as opposition parties. BJP-led NDA secured a comfortable majority in Assam winning 75 seats of the total 126 constituencies. While BJP secured 60 seats, about 33 per cent, its allies Asom Gana Parishad (AGP) and United People's Party, Liberal (UPPL) bagged nine and six seats respectively.