The first missile of the first firing unit of MRSAM for delivery to the Indian Air Force was flagged off on Wednesday by a senior official of Bharat Dynamics Limited (BDL). 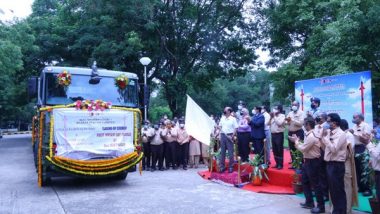 Hyderabad (Telangana) [India], July 21 (ANI): The first missile of the first firing unit of MRSAM for delivery to the Indian Air Force was flagged off on Wednesday by a senior official of Bharat Dynamics Limited (BDL).

Prasad, who is a Government Nominee Director on BDL Board and is retiring on attaining superannuation this month, was felicitated by BDL in recognition of his contribution to the company's progress during his tenure.

Commodore Siddharth Mishra (retd), CMD, BDL stated that MRSAM (Medium Range Surface to Air Missile) is one of the best examples of joint development of a weapon system.

BDL has already completed the Navy order and now both Army and Air Force programmes are moving simultaneously.

The release said that MRSAM is a high response, quick reaction, vertically launched supersonic missile, designed to neutralize enemy aerial threats - missiles, aircraft, guided bombs, helicopters. It is used by Army, Navy and Air Force in different variants. The missile has a range up to 70 km.

The missile system can provide point and area defence against various aerial targets including fighter aircraft, subsonic and supersonic cruise missiles. The missile is powered by an indigenously developed dual-pulse rocket motor and dual control system to impart the required maneuverability at the terminal phase. This state-of-art weapon system is designed with an active radio frequency seeker to identify, track, engage and destroy the target with high kill probability.

As part of its philosophy of providing product life cycle support, BDL has been supporting the armed forces with refurbishment and life extension of vintage missiles and obsolescence management.

The company is also aiming to expand its footprint in the international market by offering air-to-air missiles, anti-tank guided missiles, underwater weapons, and countermeasure systems in addition to Akash missiles to friendly countries. (ANI)