Tamil Nadu Chief Minister MK Stalin on Sunday congratulated West Bengal Chief Minister Mamata Banerjee for registering a stunning victory from Bhabanipur in the by-elections by a record margin of over 58,000 votes against her nearest rival Priyanka Tibrewal of the Bharatiya Janata Party (BJP). 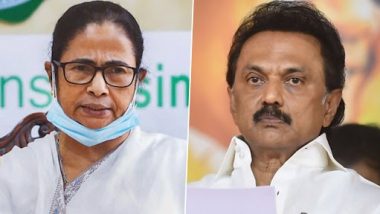 Congratulations to @MamataOfficial on her resounding victory in the Bhabanipur by-election. The massive mandate reconfirms the unassailable confidence that the people of West Bengal have reposed on you.#MamataBanerjee

The victory has made Mamata Banerjee a member of the State Legislative Assembly and will allow her to continue as Chief Minister of West Bengal. "The massive mandate reconfirms the unassailable confidence that the people of West Bengal have reposed on you, Mamata Banerjee," his tweet further read. Also Read | Punjab: Man Held for Allegedly Stealing Over Rs 6 Lakh, Jewellery from Doctor’s House in Chandigarh.

According to the Election Commission of India, Mamata Banerjee secured 85,263 votes which are around 71.90 per cent of the total votes connected in the bye-elections.

While Banerjee's main competition, BJP candidate Priyanka Tibrewal got 26,428 votes and CPI (M) candidate Srijib Biswas secured 4,226 votes. Shortly after winning the bypoll, Mamata Banerjee alleged that the central government hatched conspiracies to remove TMC from power since the start of the elections.

"Since the elections started in West Bengal, central government hatched conspiracies to remove us (from power). I was hurt in my feet so that I don't contest the polls. I am grateful to the public for voting for us and to the Election Commission of India for conducting polls within six months," said the TMC supremo while greeting her supporters outside her residence in Kolkata.

West Bengal Chief Minister Mamata Banerjee had lost to BJP's Suvendu Adhikari in the Nandigram constituency in the assembly elections held earlier this year. The Bhabanipur assembly seat was vacated by the West Bengal Agriculture Minister Sobhandeb Chattopadhyay in May, paving the way for Mamata Banerjee to contest the bypoll.