Trinamool Congress (TMC) MP Santanu Sen on Thursday accused Union Minister Hardeep Singh Puri of threatening and abusing him in Rajya Sabha on Thursday after the House was adjourned amid uproar. 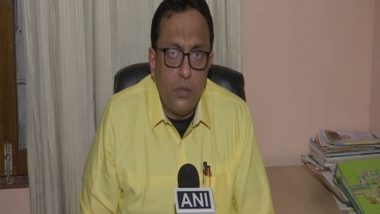 He alleged that Puri was "on the verge of physically assaulting him", however, he was rescued by his colleagues.

Speaking to ANI, the TMC MP said, "The House was adjourned. After that, suddenly, Union Minister Hardeep Singh Puri called me and his body language while calling me was very bad. Still, out of gesture, I went to him. I could not even imagine that being a minister he could threaten me like that. Pointing a finger at me, he threatened me and also used abusive language."

"The way he was threatening me, I felt that he could physically assault me anytime. Then many BJP leaders also surrounded me. I thank God that looking at the situation one of my colleagues came to my rescue. But the manner in which a Union Minister threatened a member of the House, used abusive language, and was in a mood of physical assault, is very sad," he said.

Earlier on Thursday, Sen snatched the statement from Electronics and Information Technology Minister Ashwini Vaishnaw in Rajya Sabha and tore it into pieces, amid the ongoing tiff over the Pegasus issue between the Centre and Opposition.

Following this, there was a verbal feud between lawmakers of BJP and TMC. Marshals intervened to bring the situation under control.

Heated words were exchanged between Puri and Sen after the latter snatched a paper from Vaishnaw while he was speaking on 'Pegasus Project' report in Upper House.

BJP Rajya Sabha MP Swapan Dasgupta told ANI, "It seems that some people of Opposition, notably some of the TMC MPs, got up and took the paper from the hands of the IT Minister Ashwini Vaishnaw while he was speaking on 'Pegasus' and tore it up. This is completely unseemly behaviour."

"He was making a statement, you had a right to question him after that but instead of going in for a debate, is this the type of hooliganism we see inside the House? This is completely against all norms, I think it should be condemned outright," added Dasgupta.

Vaishnaw was reading the government's statement on the Pegasus issue in Rajya Sabha on Thursday.

"When they can kill their opponents in Bengal and misbehave with women, they can do anything. Today they snatched paper and tore it, it will not be a surprise if they tear clothes tomorrow. I condemn it," said Mahesh Poddar, BJP MP.

However, TMC MP Sukhendu Sekhar Roy evaded a question on the same outside Parliament.

The Leader of Opposition in Rajya Sabha Mallikarjun Kharge on Thursday alleged that the government is trying to scuttle down the issue.

"We have been demanding for discussion on Pegasus issue. But the government is only giving a statement. One can only ask for clarification if a statement is given and not all members will be able to speak. The government is doing the same. It is an attempt to scuttle down and save themselves. They are not allowing other members to speak," Kharge told ANI.

The Opposition has alleged that names of several Indian politicians, journalists, lawyers, and activists have appeared on the leaked list of potential targets for surveillance by an unidentified agency using Pegasus spyware. This comes following reports published in The Wire. (ANI)