Maharashtra Political Crisis: ‘Uddhav Thackeray To Remain CM, Will Prove Majority on Floor of the House if Given Chance’, Says Sanjay Raut

After Maharashtra Chief Minister Uddhav Thackeray said that he would tender his resignation if the rebel MLAs demanded it, Shiv Sena leader Sanjay Raut on Wednesday said that he will "remain the CM" and the Maha Vikas Aghadi alliance will "prove its majority on the floor of the House if given the chance". 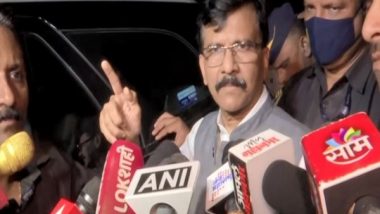 Mumbai, June 22: After Maharashtra Chief Minister Uddhav Thackeray said that he would tender his resignation if the rebel MLAs demanded it, Shiv Sena leader Sanjay Raut on Wednesday said that he will "remain the CM" and the Maha Vikas Aghadi alliance will "prove its majority on the floor of the House if given the chance".

Shiv Sena leader said this while speaking to the reporters here as political turbulence intensified in the state. "Uddhav Thackeray is Maharashtra Chief Minister and he will remain the CM. If we get the chance, we will prove our majority on the floor of the House," he said. Maharashtra CM Uddhav Thackeray Along With His Family Leaves From Official Residence Varsha in Mumbai (Watch Video).

Earlier this evening, NCP chief Sharad Pawar accompanied by Supriya Sule and Jitendra Awhad arrived at the Mumbai residence of Uddhav Thackeray. After the conclusion of the meeting which lasted around an hour, NCP leader Supriya Sule displayed a thumbs up and the Chief Minister came out to greet his supporters.

Earlier today rebel Shiv Sena MLA Eknath Shinde said that it was essential for the party for its survival to get out of the "unnatural alliance" and asserted that only the constituent parties benefitted during the tenure of the Maha Vikas Aghadi coalition government in the state.

Shinde's remarks came a short while after Chief Minister Uddhav Thackeray's Facebook address in which he said that he was ready to step down if the rebel MLAs came forward and tell him on his face that they do not have the trust in him.

"In the last two and a half years, M.V.A. The government benefited only the constituent parties. It's essential to get out of the unnatural alliance for the survival of the party. Decisions need to be taken now in the interest of Maharashtra," tweeted Shinde.

Earlier today, the beleaguered Maharashtra Chief Minister whose government is facing a crisis due to revolt within his party, said that he was willing to give his resignation to party MLAs who can take it to Raj Bhavan.

Noting that a section of party MLAs was gunning for his ouster, he said instead of going to Surat, they could have conveyed their feelings to him. Thackeray said it is a matter of shame for him if "even a single MLA" was against him.

"If any MLA wants me to not continue as the CM, I am ready to take all my belongings from Varsha Bungalow (official residence of the CM) to Matoshri," Thackeray said.

"I am ready to give my resignation to the MLAs, they should come here and take my resignation to Raj Bhavan. I am ready to leave the post of Shiv Sena party head also, not on the saying of others but my workers," he added. Thackeray said it is not about numbers but how many are against him and he will leave if even one person or MLA is against him.

The crisis in the Shiv Sena deepened after party leader and state cabinet minister Eknath Shinde today claimed that he has the support of 46 MLAs, including six to seven Independent MLAs.

Shinde accompanied by other rebels from the party had left Maharashtra a day ago for Gujarat, where it stayed for about a day in Surat. They arrived in Assam's Guwahati earlier today.