Indian troops have served in such operations since the Korean War (1950-53), and in about 51 missions, of the total 71 so far done by the UN, officials said. 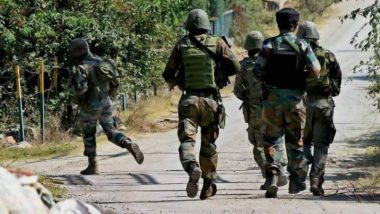 New Delhi, November 13: Indian troops for UN peacekeeping in South Sudan are training hard at an army camp here before their induction and will undergo two COVID-19 tests before being sent to that country, senior officials said on Friday. Indian troops are "one of the most sought after" when it comes to deployment in a foreign country for peacekeeping, a senior official of the army.

"At present, our troops are already serving in South Sudan with blue helmets under the UNMISS and the new troops getting trained in the Khanpur Transit Camp in south Delhi will be inducted in batches to relieve those serving there right now in a phased manner. However, all precautions are being taken due to COVID-19," he said. The UNMISS is United Nations Mission in South Sudan. The official said before final induction, each member of the battalion undergoes rigorous training at the camp and has to clear two RT-PCR tests.

"One test is conducted 21 days ahead of the date on which they are to be flown for induction. And, those found negative are then quarantined at various facilities, including one at Manesar in Haryana. Then they are administered another COVID test, 72 hours before induction. So, all precautions have been taken, besides social distancing norms," he said. China Plans to Increase Influence at UN Missions by Deploying More Troops: Govt Source.

The purpose of "quarantining" them is to keep them safe so that they do not contract the infection, the official said. Another senior official said that after reaching the destination country, there is a "mandatory 14-day quarantine to ensure safety of all troops".

One contingent of the battalion is slated to fly to South Sudan on November 27, he said. At the Khanpur camp, a group of reporters on Friday were given a sneak peek into the training regimen of the troops, under "exercise Blue Helmet".

India is among the largest troop contributing countries to UN peacekeeping operations, which help nations navigate the difficult path to peace post a conflict. Indian troops have served in such operations since the Korean War (1950-53), and in about 51 missions, of the total 71 so far done by the UN, officials said.

Currently, Indian troops are serving in eight of the 13 peacekeeping missions, and since the Korean War, "about 2.5 lakh of our troops" have served in such missions till date, the officials said. Blue helmets and blue berets, two of the most enduring symbols of UN Peacekeeping Missions, are ubiquitous in the premises of the Khanpur camp, while huge containers with "UN" painted on those, were kept in one corner.

At the camp, a slithering zone has been made where para-trooping skills are practiced by battalion members using a towering structure as the base point.

A demonstration of their skills was given by a few members, who shouted, "Commando" as they slithered down to the ground.

A simulated experience of what UN peacekeeping troops might face in South Sudan was played out by troops, demonstrating how the "rules of engagement" are diligently followed as laid out in the protocols of the UN, even in the face of physical danger.

"There is a whole matrix for the rules of engagement, like when and how to fire, how to engage with a violent group, as it might come up due to inter-tribal clashes there. Our troops are trained to follow the UN mandate, and discipline of the Indian army is already in their psyche," another army official told PTI. China Finally Congratulates Joe Biden, Kamala Harris for Their Victory in US Presidential Election.

In fact, some members of the battalion have been taught the Arabic language, so that they can broadly communicate with members of a tribe or the local population, he said. At the camp, a sand model area has been created of a region in South Sudan with a camouflaged environment for learning the ropes.

"Indian troops are also sought after due to their high level of empathy, as India believes in the philosophy of 'Vasudhaiva Kutumbakam' or whole world is a family, so we serve in other countries for peacekeeping with that feeling of universality," the official said.