Jeet Bahadur Thapa shudders as he recalls how he and other Indians thought they might be killed by the Taliban gunmen any moment after they were made to sit on ground in an open area at Kabul airport for five hours by the militia before they could leave for India. 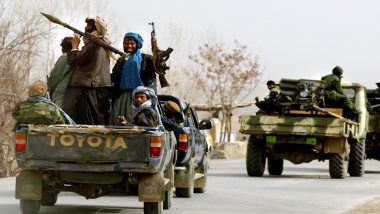 Shahjahanpur, August 23: Jeet Bahadur Thapa shudders as he recalls how he and other Indians thought they might be killed by the Taliban gunmen any moment after they were made to sit on ground in an open area at Kabul airport for five hours by the militia before they could leave for India.

Thapa, 30, a native of Chinore village here, was working as a supervisor in a consultancy company in Afghanistan for two and a half years and was among those evacuated after the Taliban took over Kabul. Also Read | Faridabad Shocker: Minor Raped By Staffer at Private Hospital; Case Registered Under POCSO Act.

As many as 118 people from India worked in the company and all of them started on foot for the Denmark embassy, which was 30 km away, hoping that they will get a safe passage to India. “There was the fear of the Taliban. Some robbers stopped us and robbed us of about Rs one lakh and all the other belongings. Also Read | National Monetisation Pipeline: Indian Railways To Monetise Assets Worth Rs 1.52 Lakh Crore by Financial Year 2025, Says Nirmala Sitharaman.

"Some Taliban members accosted us shortly before we arrived at the embassy and asked if we were Hindus. They let us go after we introduced ourselves as Indian citizens," Thapa said.

When the Indians told them that they were robbed, the Taliban members claimed that local criminals might be involved and that the Taliban were not involved in such activities, according to Thapa.

"Many people were injured after walking for so long in the dark," he said.

On August 18, they reached the airport area in Kabul where lakhs of people had gathered in a desperate bid to escape from the country. They spent three days there with barely any food.

"The Taliban gunmen present there made all the Indians sit on the ground in an open space for about five hours. We sat silently in fear that the Taliban who had modern weapons might kill us," he said. "When an Army plane arrived, we all left for Delhi on August 22 morning," he said. Thapa said there is an undeclared curfew in Afghanistan.

"All companies and offices are closed. No one is leaving their house... Women and children in Afghanistan are very afraid and that's why no women are seen on the roads," he said. Replying to a question, he said he did not see the Taliban committing atrocities on women but people fear them due to their past actions.

"The Taliban are on the streets due to which there is an atmosphere of fear. The Taliban are constantly appealing to the people of the country that no person should leave Afghanistan and that that they won't let anyone cause any trouble," he said.

The Islamic militia seized control of Kabul on August 15 after taking over almost all key towns and cities, following the withdrawal of the US forces. As part of its evacuation mission from Afghanistan, India has already brought back around 730 people including members of the Afghan Sikh and Hindu communities.