After playing a subsequent line of onscreen villains, American actor and musician Jared Leto uncovered why he hesitantly took up one more in 'The Little Things'. 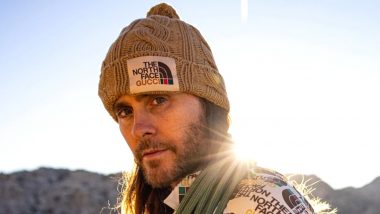 After playing a subsequent line of onscreen villains, American actor and musician Jared Leto uncovered why he hesitantly took up one more in The Little Things. The actor who is known for essaying distinct roles is seen playing a serial killer in the film, which released on Friday, January 29 in India. In an interview with The Hollywood Reporter, the actor told that the opportunity to pull off a total transformation made him agree to the role. "My first thought was to say no. I wasn't sure about playing a murder suspect or potential villain again. But after talking to John, there seemed to be an amazing opportunity," Leto told. We Crashed: Anne Hathaway, Jared Leto to Play WeWork Co-Founders Rebekah and Adam Neuman in Upcoming Apple TV Series

He added, "If we could make this heavy on character and make this a really transformative role, I could be interested in having this be the last walk on the dark side of the moon, but only if we could really push it as far as possible. He was open to that and excited. So I just went to town." The 49-year-old actor also disclosed that he connected with Director John Lee Hancock because he was a fan of his film 'The Founder' The 'Battle Club' star who has played a lot of reprobates in the previous few years said that he explored 'some darker territory' through the character he portrayed in 'The Little Things'. Jared Leto Supports Zack Snyder on Justice League’s Snyder Cut, Calls Him a ’Madman’ (Watch Video)

"I really wanted to see how complete of a character, from head to toe, from the way that I carried my feet to the way that I spoke -- I really wanted to push the boundaries a bit to see how far we could walk toward that line without crossing it," he said. "I think if you have some respect or empathy, you can find some humanity in a morally bankrupt sociopath and a psychopath," Leto told The Hollywood Reporter. Albert Sparma, the role played by Leto is a dark character, but he also provides a little bit of comic relief as he antagonizes the detectives played by Denzel Washington and Rami Malek.

Thanking his co-stars John Lee Hancock, Denzel Washington, and Rami Malek for putting up the humour in the character he added, "Humor was a tool for me and for the character. I kind of found him endearing and quite funny, to be honest. And I'm sure there are lots on the cutting room floor" When asked about how sharing the same frame with two great actors Denzel and Rami feels like, Leto told, "Denzel Washington is one of my heroes. To work with him was a dream, and it was a master class in acting.

His consistency and his commitment to throwing himself physically and emotionally into every single role are incredible. It doesn't matter if a movie doesn't work, he is always great. And Rami is just terrific, the perfect partner for Albert Sparma. He was incredibly generous and patient." The flick is helmed by ace director John Lee Hancock, who directed best picture nominee 'The Blind Side' and 'The Highwaymen'.

The story of the movie is about a burned-out Kern County, California deputy sheriff named Deke played by Oscar winner actor Denzel Washington, who teams with Baxter, a crack LASD detective, played by another Oscar winner actor Rami Malek in the film, to control a wily serial killer.