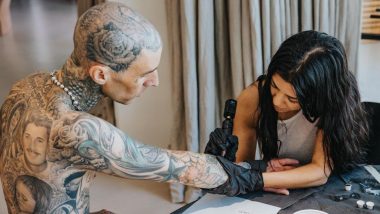 American reality TV star Kourtney Kardashian tried hands-on tattoos and got her boyfriend Travis Barker's arm inked with the three magical words 'I love you'. The 'Keeping Up With the Kardashians' star took to Instagram to post a video with the caption, "I tattoo". The post featured a video, and carousel of pictures from the process in which Kardashian slipped on a pair of medical-grade and black gloves. The clip shows the mother-of-three taking the tattoo gun to give Baker his latest piece of ink. On his own Instagram Story, Travis said she is the "best tattoo artist." Kourtney Kardashian’s Relationship With Travis Barker Makes Scott Disick ‘Uncomfortable’.

He shared a picture of the fresh ink on Instagram, revealing the words "I love you" written in black ink on his arm. This is the second tattoo dedicated to the 'Poosh' founder. In April, Travis unveiled a chest piece that reads 'Kourtney' in cursive script. As reported by E! News, it is rumoured that the 'Blink-182' drummer's tattoo of Audrey Hepburn is also dedicated to Kourt, as the actor is one of her idols. But Travis has never confirmed the speculation. Kourtney Kardashian’s Beau Travis Barker’s Ex-Wife Asks KUWTK Star to Get Boyfriend’s Name Inked.

It seems Travis is not one to shy from grand displays of affection. Over Mother's Day weekend, Travis gifted Kourt with an over-the-top bouquet of roses, which nearly took up the entire entryway. E! News unveiled that the Mother's Day flowers follow their romantic getaway to Amangiri, Utah, where they celebrated Kourtney's birthday a week after it already happened. It would be safe to say that special occasions aren't the only times Kourtney is treated like a goddess.

The insider said, "He is very into her and waited a long time to be able to show her how much he cares. He wants to spend all of his time with her and is constantly telling her how much he loves her." Kourtney also reciprocates the love. Every time the single dad gives her a present or spoils her with flowers, she documents the moment on her Instagram, captioning the images with a barrage of emojis.