Seems like Travis's ex-wife Shanna Moakler has found something to scoff at about his new relationship. 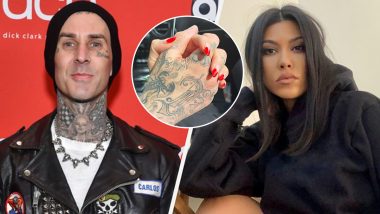 Shanna Moakler, the ex-wife of Kourtney Kardashian's beau Travis Barker, sarcastically urged the reality TV star to get her boyfriend's name inked on her body, just as he did for her recently. Seems like Travis's ex-wife Shanna Moakler has found something to scoff at about his new relationship. TMZ spotted her at an airport and asked her to comment on the chest tattoo his ex-husband got which displays his famous girlfriend's name. Kourtney Kardashian, Travis Barker Enjoy Double Date with Megan Fox, Machine Gun Kelly at UFC Fight (Watch Video).

To which she replied that Kourtney is not the only flame Travis inked on his body, but regardless encouraged her to return the gesture by getting his name permanently emblazoned on her. TMZ reported that Shanna further added that she is not sure if the Kardashians and Jenners do tattoos because she does not follow any of them. In the end, she also revealed that she also has a 'Travis' tattoo on her body but, "it's going, going and soon-to-be gone".Travis Barker Shares Handwritten Note from Girlfriend Kourtney Kardashian (See Pic).

Travis shares son Landon Asher and daughter Alabama Luella with ex-wife Shanna Moakler while Kourtney shares sons Mason Dash and Reign Aston and daughter Penelope Scotland with ex Scott Disick. The Poosh founder was "ready for a relationship with a more mature guy" when she started dating Travis, a source told the outlet last month, adding, "Kourtney and Travis have a long, long history and years of friendship. They've felt like family for years, and she's really close with Alabama, who's just a cool rock star kid."