While the new romance is in the air for reality TV star Kourtney Kardashian and Travis Barker, seems like there is one person who is not okay with this serious relationship, and he is Kourtney's ex Scott Disick. 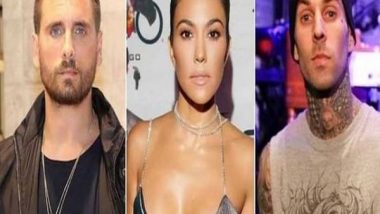 "Scott has really distanced himself from Kourtney recently," a source close to the reality star exclusively shared with E! News. "Of course they are still cordial when it comes to the kids, but they aren't hanging out as much or doing things as a family. The communication has become strictly about the kids," the source told. Scott, who is continuing to shoot the reality show with the Kardashians-Jenners in California and also dating his new girlfriend Hamlin, is finding hard to gulp the chemistry and headlines surrounding Kourtney and Travis. Kourtney Kardashian, Travis Barker Enjoy Double Date with Megan Fox, Machine Gun Kelly at UFC Fight (Watch Video).

"He is glad she is happy, but it's definitely been hard on him. He doesn't like to bring it up and it's a weird convo for him. At one point, the family was really encouraging Scott and Kourtney to try the relationship again and it's a bit of an eye opener for him, that it's truly never going to happen." During recent episodes of 'Keeping Up With the Kardashians' final season, fans watched Scott and Kourtney interact when they were both single. Scott showed signs of being open to the idea while admitting, "It hurts me when you're with somebody else."

While both parties are now in separate relationships, a second source close to Scott told, "He is trying to adjust and be a grown up about it, but seeing Kourtney get so serious with someone so quickly is not easy. Scott has never been comfortable seeing Kourtney with guys, but this feels different." Before their friendship turned romantic, Travis and Kourtney were longtime neighbours. Kourtney shares three kids - 11-year-old Mason, 8-year-old Penelope and 6-year-old Reign, with ex Scott Disick. The Blink-182 musician has two kids, 16-year-old Landon and 15-year-old Alabama with ex-wife Shanna Moakler.