The passenger vehicle (PV) electrification is expected to follow, with 10-15 per cent penetration in the personal segment and 20-30 per cent in the commercial one by 2030, said the report. 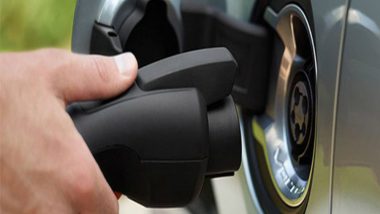 Mumbai, November 3: Electric two-wheeler penetration in India is expected to reach 25-35 per cent and that of e-three-wheelers at 65-75 per cent by 2030 even as OEMs and both central and state governments need to work collaboratively for an integrated policy and creating a conducive ecosystem for EV adoption in the country, a report said on Tuesday.

According to the report, 'Shifting Gears, the evolving electric vehicle landscapes in India' prepared by KPMG in association with CII, currently, only a few state EV policies provide guidelines and incentives on battery recycling.

KPMG in India expects 25-35 per cent 2W penetration and 65-75 per cent in 3Ws by 2030. The passenger vehicle (PV) electrification is expected to follow, with 10-15 per cent penetration in the personal segment and 20-30 per cent in the commercial one by 2030, said the report. However, about 10-12 per cent of the overall market for buses is expected to be electrified by 2030, it added. Air Pollution: 8 Construction Sites Penalised Rs 2.96 Lakh for Violating Anti-Air Pollution Guidelines in Noida.

"EVs are on course to fulfil their promise as a game-changer for the automobile industry. Two-wheeler (2W) and Three-wheeler (3W) auto segments are likely to lead the adoption curve followed by e-buses and passenger taxis, " said Rohan Rao, Partner – Industrials and Automotive, KPMG in India.

According to him, directionally several factors, including the availability of charging infrastructure, robust financing ecosystem, reduced battery prices and increased customer awareness, are paving the way for a new era of EV adoption.

The government is also pushing EV policy to address some of the adoption barriers, he said, adding that EVs are emerging as a disruptive force, with several players experimenting with and discovering new innovative business models and use cases.

Since the running cost of EVs is much lower than IC engine vehicles (one-tenth for 2W and 3W), a strong case emerges for a shift to EVs in the B2B segment, he said. Delhi: Over 3000 Electric Vehicles Registered in National Capital.

Stating that the ecosystem creation is the key, Rao said a widespread network of charging stations is vital for ensuring the fast adoption of EVs. Moreover, the local component ecosystem needs to be established. The government has launched a Phased Manufacturing Programme under FAME-II through which it is pushing the indigenisation of parts.

The government has also outlined plans to set up battery manufacturing plants in India, he said.  Overall, there seems to be great promise in India's EV story, as all the above factors come together to drive long-term growth, Rao stated. According to the report, innovative business models such as battery swapping have emerged and will become mainstream to enable widespread EV adoption.

In line with Make-in-India initiatives and global supply chain realignments, the government is strongly pushing the localization of production to achieve the twin objectives of self-reliance and job creation, the report stated while emphasizing o a coherent recycling policy.

Noting that the state EV policies could lay a greater focus on demand incentives that shall bring down the upfront cost differential, the report said they could have certain targets for the conversion of EVs, at a segment level or for a particular industry/use case.

Recommending for setting up of adequate charging infrastructure is key to encourage users to consider EVs, the report said EVs could be promoted by encouraging users to purchase/use EVs over ICE vehicles with measures such as increasing road tax/registration fees on ICE vehicles, levying cess on the sale of petrol/diesel or surcharge on parking, providing incentives on scrapping and deregistering of ICE vehicles.

The vehicle scrappage policy is expected to spur the adoption of EVs, it said.

As more EVs enter the market, there is a need to formulate clear policies on sustainable end-of-life and disposal practices for the EV industry, the report said adding corporate average fuel economy (CAFE) norms to mandate automakers to have a certain percentage of their vehicle sales as electric vehicles.

“EVs are undoubtedly the way forward for sustainable mobility and are increasingly gaining traction across the world. In India, the charge is being led by 2W and 3W segments, followed by public transport and non-public passenger fleet. One of the biggest hurdles India currently faces is our limited ecosystem for EVs," said Jeffry Jacob, Partner, Management Consulting - Industrials and Automotive, KPMG in India. Telangana Electric Vehicles Policy Launched: First Two Lakh Electric Two-Wheelers Exempted From Road Tax, Registration Fee.

Pointing out that a significant number of critical components still continue to be largely imported and the charging infrastructure is largely inadequate, he said, however, the industry and government are proactively working to address these constraints and are taking steps in the right direction.

Several leading states have released EV policies with a clear focus on driving increased adoption through both demand and supply led incentives, he said.

"With the right focus, collaborative approach by all stakeholders and a pragmatic policy we can help drive clean mobility and be on the forefront in transitioning to a fossil-free future as well," Jacob added.