The Oil Ministry has stopped making fresh allocation of natural gas from domestic fields to the city gas sector, threatening the viability of Rs 2 lakh crore investment planned in the sector besides leading to a hike in CNG and piped cooking gas prices to record levels, sources said. 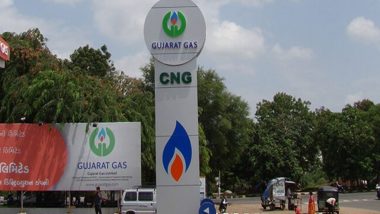 New Delhi, April 17: The Oil Ministry has stopped making fresh allocation of natural gas from domestic fields to the city gas sector, threatening the viability of Rs 2 lakh crore investment planned in the sector besides leading to a hike in CNG and piped cooking gas prices to record levels, sources said.

Despite a decision of the Union Cabinet to give 100 per cent gas supply under 'no cut' priority to the city gas distribution (CGD) sector, current supplies have been maintained at March 2021 demand level. Besides, the process of allocating gas on a six-monthly average drawl also is punishing the CGD entities driving growth. Fuel Price Hike: IGL Hikes CNG Price in Delhi by Rs 2.5 Per Kg.

CGD operators have been requesting the ministry to maintain the gas supply to the sector under no cut category with the last two months' average to ensure the demand for both CNG and piped natural gas (PNG) for homes is fully met but the ministry has not made any fresh allocation for over a year now, three sources aware of the matter said.

Besides the shortfall in the allocation, the prices of APM gas for CNG and PNG have been revised from USD 2.90 per million British thermal unit to USD 6.10, an increase of 110 per cent.

While the demand has grown at a rapid pace in existing cities with CNG networks and supplies starting in newer areas, lack of allocation from domestic fields meant that operators bought imported liquefied natural gas (LNG) at prices that were at least six times the domestic rate. Result - CNG prices have risen by 60 per cent or by over Rs 28 per kg in one year and PNG by over a third.

Sources said this has put a question mark on the economic viability of the entire CGD sector, putting at risk the planned Rs 2 lakh crore investment in expansion into newer cities as high prices bring the CNG at almost par with diesel and petrol, eroding the incentive for users to convert vehicles to the cleaner fuel.

The Oil Ministry had on August 20, 2014, issued revised guidelines, promising allocation of gas from domestic fields to city gas operators every six months based on a demand assessment of CNG and PNG in a particular geographical area (GA). This was used as a selling point to bid out over 200 GAs since 2018, attracting over Rs 2 lakh crore of investment commitment in the rollout of city gas distribution infrastructure.

But the gas allocation wasn't increased at the April 2021 review and the subsequent cycles, they said adding against the requirement of 22 million standard cubic meters per day of gas, the CGD sector is getting 17 mmscmd from domestic fields.

The balance is met by buying imported LNG which in the current month costs USD 37 per million British thermal unit, they said. This compares with the USD 6.10 per mmBtu rate for domestic gas.

"The domestic gas price saw a massive 110 per cent increase - from USD 2.9 per mmBtu to USD 6.1 mmBtu from April 1. This itself puts a huge burden and on top of this being forced to buy even higher-priced imported LNG will turn this sector economically unviable," a source said.

New GAs that were bid out in CGD Rounds IX, X and XI are now coming up and no gas allocation being made would mean they will have to buy imported LNG for supplying as CNG to automobiles and PNG to household kitchens.

"GAs with just imported LNG would mean a price of Rs 100-105 per kg," another source said. This compares to the price of Rs 71.61 per kg in Delhi and Rs 72 in Mumbai, where nearly 70 per cent of the requirement is met by domestic gas.

"The CGD sector is in a bad shape. It is already facing an onslaught of EVs and now high prices of CNG will be a deterrent for diesel or petrol vehicles to convert to CNG. CNG is an environmentally-friendly fuel but ultimately what matters is cost economics and if the conversion and running cost comes to be higher than diesel or petrol, no one will convert," the first source said.

"Domestic gas supplies are finite. If we have to increase supplies to one sector, it has to come at the cost of supplies to other sectors. Already the government is facing a higher fertiliser subsidy bill this fiscal and the subsidy outgo will increase further if the fertilizer plants are to use higher-priced imported LNG to make urea and other crop nutrients," a ministry official said.