Instant messaging platform WhatsApp on Thursday said it will add more features, including the facility to connect with 32 people in a group voice call and sharing files with size of up to 2 gigabyte. 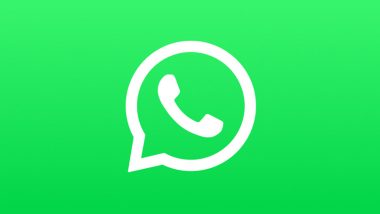 New Delhi, April 14: Instant messaging platform WhatsApp on Thursday said it will add more features, including the facility to connect with 32 people in a group voice call and sharing files with size of up to 2 gigabyte.

At present, only eight people can be added in a group voice call using the mobile app, and the size of each file to be exchanged among the users should not exceed 1 GB. WhatsApp Working on New ‘Community’ Feature, To Give More Control to Admins.

WhatsApp will also allow the administrator of a chat group to delete messages anytime. The deleted conversation will not be visible to any group members, a company spokesperson explained.

"We built WhatsApp communities to make it much easier to organise all your group chats and find information. You'll be able to bring different groups together into one community -- for example, in addition to individual groups for different classes, you might have one overall community for parents at a school with a central place for announcements and tools for admins.

A WhatsApp blog post said while other apps are building chats for hundreds of thousands of users, it is choosing to focus on supporting the groups that are part of daily lives. "We'll introduce one-tap voice calling for up to 32 people with an all-new design," the blog post said.

Among the new features that will be rolled out gradually, WhatsApp will provide an option of creating communities under which all groups representing a set of communities like school, residential society, friends at various places can be organised.

"Communities will also contain powerful new tools for admins, including announcement messages that are sent to everyone, and control over which groups can be included. We think communities will make it easier for a school principal to bring all the parents of the school together to share must-read updates and set up groups about specific classes, extracurricular activities or volunteer needs," the post said.