Raghava Lawrence, the director of Akshay Kumar and Kiara Advani starrer upcoming film 'Laxmmi Bomb' recently revealed why the film's title was changed from the original title 'Kanchana'. On being asked about the reason behind changing the title for the Hindi remake of his Tamil film 'Kanchana', 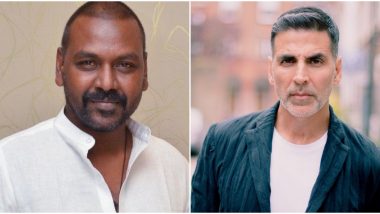 Raghava Lawrence, the director of Akshay Kumar and Kiara Advani starrer upcoming film 'Laxmmi Bomb' recently revealed why the film's title was changed from the original title 'Kanchana'. On being asked about the reason behind changing the title for the Hindi remake of his Tamil film 'Kanchana', Lawrence said, "Our Tamil film was named after the main lead character Kanchana. Kanchana means 'gold' which is a form of Lakshmi. Earlier I considered going the same way for the Hindi remake but we collectively decided that the name must appeal to the Hindi audience as well and what better than Laxmmi." Laxmmi Bomb: Anger Towards Akshay Kumar’s Film Makes Trolls Attack This Unrelated Indie Flick’s Google Score

"By god's grace, it was turning out to be a cracker of a film, so we named it 'Laxmmi Bomb'. Like a dhamaka of Laxmmi Bomb cannot be missed, the transgender lead character is powerful and radiant. Hence the name fits perfectly," he added. The filmmaker further talked about why he chose to film a story that emphasises on the transgender community. To which he responded saying, "I run a trust and a few transgenders approached my trust for help. When I heard their story, I felt like I wanted to tell their story to everyone through the character called Laxmi in this movie. After watching the film audiences will know what I am talking about." Laxmmi Bomb: Aamir Khan Is Super Impressed by Trailer of Akshay Kumar’s Next, Says ‘Wish It Was Releasing in the Theatres’

The director further dished on his thoughts on the idea of helming a movie that for the first time had a mainstream Bollywood actor playing a transgender character. He said, "after 'Kanchana' released in Tamil, the movie received huge appreciation from transgenders. They directly came to my home and blessed me. So, in Hindi when Akshay sir is playing the role, I believe that the message will reach an even wider audience. My special thanks to Akshay sir for accepting and playing this role."

Last week, the 'Khiladi' actor shared the trailer of 'Laxmmi Bomb' Akshay is playing the characters of 'Asif' and 'Laxmmi', one is trying to convince the parents of Kiara, while the other has come to take revenge.The character of 'Asif' does not believe in ghosts as a dialogue confirms-- "Jis din sach mein mere samne bhoot aaya na, toh maa kasam choodiya pehn lunga. (The day a ghost appears before me in reality, I swear by my mother that I will wear bangles)."

Later in the trailer, he is seen admiring his hands full of red bangles, while the same dialogue can be heard in the background. As the trailer moves forward, the carpet of both comedy and horror rolls out in snippets. The movie is set to premiere on November 9, 2020, on DisneyPlus Hotstar.