Oscar-winning Chinese-American filmmaker Chloe Zhao, whose much-acclaimed 'Nomadland' was launched from the Venice Film Festival last year, is set to return to the Lido as a member of the upcoming fest's main jury. 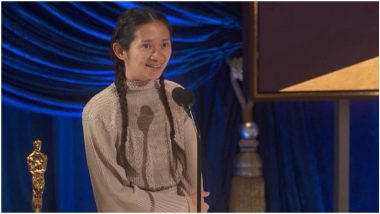 Oscar-winning Chinese-American filmmaker Chloe Zhao, whose much-acclaimed 'Nomadland' was launched from the Venice Film Festival last year, is set to return to the Lido as a member of the upcoming fest's main jury. According to Variety, the jury will comprise four women and three men. Another multiple Oscar-winning director Bong Joon Ho, who helmed 'Parasite' will preside over the jury of the event's upcoming edition. Timothee Chalamet, Zendaya’s Dune to World Premiere at Venice Film Festival in September.

They will be serving jury duty on the Lido alongside French actor Virginie Efira, who most recently starred in Paul Verhoeven's 'Benedetta'; the UK's Cynthia Erivo, who plays Aretha Franklin in the third season of National Geographic's 'Genius' series; and Canadian actor and producer Sarah Gadon who made a splash in Venice in 2011 with her role in David Cronenberg's 'A Dangerous Method' and more recently appeared in Xavier Dolan's 'The Death and Life of John F. Donovan.' Chaitanya Tamhane’s The Disciple Wins Big at 77th Venice Film Festival.

Italian director Saverio Costanzo and Romanian filmmaker Alexander Nanau, whose Oscar-nominated documentary 'Collective' premiered in Venice in 2019, round off the jury that will be presenting the Golden Lion. As per Variety, Venice fest organizers on Wednesday also announced that Bosnian filmmaker Jasmila Zbanic will preside over the jury of the Orizzonti (Horizons) section, which is dedicated to more cutting edge works.

The five-member Horizons jury will also comprise Norwegian director Mona Fastvold, whose 'The World to Come' launched from Venice last year; Iranian director Shahram Mokri, whose 'Fish/Cat' won the 2013 Orizzonti Special Prize for innovative content; Italian novelist Nadia Terranova, and Josh Siegel who is the curator of the film department at the MoMA in New York.

On the other hand, the members of the jury for the 'Luigi De Laurentiis' Venice Award for a Debut Film - Lion of the Future are Britain-based Italian producer and director Uberto Pasolini, who will serve as president; Austrian film critic, academic and festival director Martin Schweighofer; and Argentinian visual artist and film director Amalia Ulman.

The winners will be awarded a USD 100,000 cash prize donated by Italy's Filmauro. As per Variety, the cash price is supposed to be divided equally between the director and the producer of the best first work across all festival sections. The 78th edition of Venice will run from September 1 to September 11, this year. The lineup will be announced on July 26, 2021.