As part of the pact, the next four Tamil movies from Suriya's production company 2D Entertainment will premiere on Amazon Prime Video 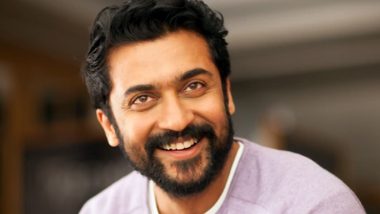 Suriya, founder of 2D Entertainment, who has earlier collaborated with the streamer on films like “Ponmangal Vandhal” and "Soorarai Pottru", said he is thrilled to take this partnership a step further. "The past year has been transformative. Given unprecedented circumstances, we innovated on different models of release. Amazon emerged as the chosen streaming service for 2D's latest film launches. Navarasa Trailer: Suriya, Vijay Sethupathi, Parvathy And Others Come Together For A Wildly Intriguing Anthology Series (Watch Video).

"From ‘Ponmangal Vandhal' to ‘Soorarai Pottru', these beautiful tales found audiences and resonance not just in India, but across the world,” Suriya said in a statement. The line-up of films include “Jai Bhim”, a legal drama also starring Prakash Raj; family drama "Udanpirappe", children's film "Oh My doG" and satirical drama "Raman Aandalum Ravanan Aandalum". Vijay Subramaniam, Director and Head of Content at Amazon Prime Video, said they are thrilled to start another chapter in streamer's collaboration with Suriya's production house.

"This association comes on the back of the incredible love that 2D Entertainment's 'Soorarai Pottru' and 'Ponmangal Vandhal' received from audiences worldwide," he added. Subramaniam said in the last one year, the streamer's local language movies have broken viewership records to register 50 per cent of audiences outside their home state.

"International viewers accounted for up to 20% of total audiences of local language direct-to-service films. "We are thrilled to lead the charge by enabling great, home-grown, local language stories find audiences across the world, made possible because of our strong relationship with creative powerhouses such as 2D Entertainment," he said.