Babar Azam's mother was on a ventilator when the Pakistan skipper went about leading his team to a thumping victory over arch-rivals India in their T20 World Cup match in Dubai last Sunday. 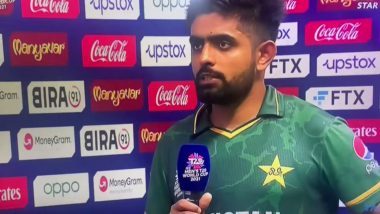 Karachi, October 30: Babar Azam's mother was on a ventilator when the Pakistan skipper went about leading his team to a thumping victory over arch-rivals India in their T20 World Cup match in Dubai last Sunday.

The right-handed batter smashed an unbeaten 68 against India on the big day, even as his mother was put on a ventilator following a surgery. Babar's father has posted a message on his Instagram account saying that the Pakistan captain played all three World Cup games "in severe distress". Also Read | 10-0! Jose Mourinho Starts AS Roma Managerial Career in Style by Defeating Serie D Side Montecatini.

"It's time for my nation to know some truth. Congratulations to all of you on the victory in all the three games. There was a big test at our house. On the day the match was against India, on that day Babar's mother was on a ventilator," Azam Siddiqui wrote on Instagram.

"Babar played all three matches in severe distress. I don't want to come here. It was supposed to be, but I came so that Babar may not get weak. It is by the grace of God that he is fine now," he added, alongside a family photograph.

Pakistan are on the verge of qualifying for the semifinals of the T20 showpiece, having won all their matches so far, including the 10-wicket drubbing of India in their opener.

"The purpose of sharing is to not criticise our national heroes without any reason. And yes, I know, if I don't get paradise. If you get a position, you have to give exams too. Long live Pakistan," Siddiqui said.

Babar is captaining Pakistan for the first time in a global event and has done well so far, evidence of which is the team's unbeaten run in the ongoing T20 World Cup. Pakistan next face Namibia on Tuesday.