Mourinho's Roma side completely dominated their opponents and would be looking at doing the same when they take on Serie B side Ternana on Monday. 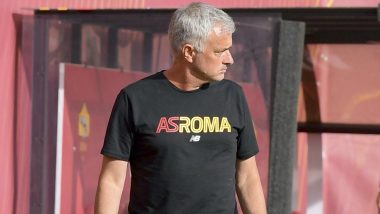 Jose Mourinho has undoubtedly been a world class coach and he made his AS Roma debut in style, leading his side to a massive 10-0 win on Thursday. Playing against Serie D side Montecatini  at the club training ground, Mourinho's men geared up for the upcoming season by putting 10 past the fourth-tier side. Out of the 10 goals, striker Borja Mayoral scored a hattrick while Carles Perez, Gianluica Mancini, Amadou Diawara, Nicolo Zaniolo, Ricardo Calafiori and Nicola Zalewski were the other scorers for the Rome club. They were aided by an own goal as well.  Jose Mourinho Defends His Managerial Record, Says ‘What Is Considered a Disaster for Me Is Something Other Coaches Have Never Achieved’

AS Roma posted the result of this match on Twitter:

The first training game of pre-season has just finished: a 10-0 win against guests Montecatini.

This is Mourinho's second stint as manager in Italy after the Portuguese won the treble- Champions League, Serie A and Coppa Italia with current Serie A champions Inter, in the year 2010. His spell at Roma would be an important one, not just for the club but also for himself, so that he can prove a point after getting fired by Tottenham Hotspur last season. Roma would next take on Serie B side Ternana on Monday.

(The above story first appeared on LatestLY on Jul 16, 2021 08:41 PM IST. For more news and updates on politics, world, sports, entertainment and lifestyle, log on to our website latestly.com).

Comments
Tags:
10-0 AS Roma AS Roma vs Montecatini Jose Mourinho Mourinho Roma Serie A Serie D
Comments
You might also like