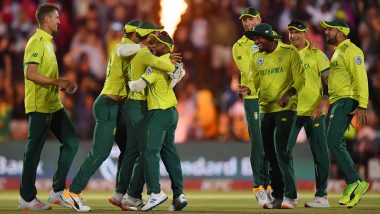 Cape Town, July 9: 24 South African players who will be participating in an exhibition 3TC match may not wear the Black Lives Matter (BLM) logo on their shirts but they will join in the anti-racist movement.

The 'Black Lives Matter' logo has been worn by players in the Premier League and even players from both England and West Indies are wearing it on their jerseys in the ongoing first Test of the three-match series. Also Read | Brighton vs Liverpool, Premier League 2019-20: Mo Salah, Sadio Mane and Other Players to Watch Out in BHA vs LIV Football Match.

"We are discussing various ways of handling it. The kit has gone to print already. We need to figure out how we can be effective about it, authentic and spread the messages that are meaningful to us as South Africans and how it affects us on a daily basis," ESPNCricinfo quoted Graeme Smith, Cricket South Africa's director of cricket as saying.

"We are all in our own little pockets and I think it's important that in the future we all come together and figure out how we can play our role in the Black Lives Matter movement," he added. Also Read | England vs West Indies 1st Test, Day 1 Three-Point Highlights: Rain Plays Spoilsport as Cricket Resumes Amid Coronavirus Crisis.

The 3TC match will be played on July 18, which is also Mandela day and celebrates the birth of Nelson Mandela. On this day, people are asked to spend 67 minutes of the time (the number corresponds to the years Mandela spent fighting for liberation) engaged to help others.

England and West Indies players and coaching staff also took the knee before the start of play on day one to show solidarity with the anti-racism movement. The 'Black Lives Matter' movement gained momentum due to the death of an African-American man named George Floyd, following a police officer, later identified as Derek Chauvin, pressed his knee on Floyd's neck as suggested by the viral videos.

Ever since Floyd's demise, many sportspersons have come out to talk about their experience with racism. Windies opening batsman Chris Gayle also said that he had faced racism, and added that it is a myth that the menace of racism exists just in football.