The decision has stirred a controversy with former Australia captain Mark Taylor cautioning against abusing the concussion substitute rule, saying it is for the protection of players and needs to be used fairly and responsibly. 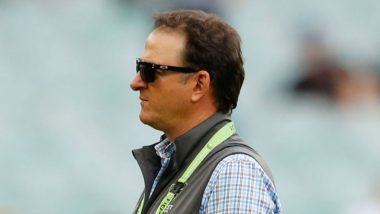 All-rounder Ravindra Jadeja was replaced by spinner Yuzvendra Chahal as a "concussion substitute" after he was hit on the head in the first T20 International in Canberra on Friday. Chahal went on to play a major role in India's 11-run win with figures of 3/25.

"I think something the ICC has to look at is whether you need a neutral appointed doctor to make the concussion decision," Waugh said on Fox Cricket. Ravindra Jadeja Ruled Out of T20I Series vs Australia After Suffering Concussion, Shardul Thakur Replaces All-Rounder.

"Obviously the team doctor of the Indian team made that ruling. I'm not saying he did anything wrong, but I think the ICC need to look at employing a medical officer or doctor who is neutral to make the decision."

The decision has stirred a controversy with former Australia captain Mark Taylor cautioning against abusing the concussion substitute rule, saying it is for the protection of players and needs to be used fairly and responsibly.

Former India captain Sunil Gavaskar, however, didn't find anything wrong in Chahal coming on as a "concussion substitute" for Jadeja. Yuzvendra Chahal Named As Ravindra Jadeja’s Concussion Substitute After the All-Rounder Was Hit on Helmet During IND vs AUS 1st T20I in Canberra.

After the decision, Australia head coach Justin Langer was seen having an animated conversation with match referee David Boon on the sidelines but it was not known whether it had anything to with Chahal being allowed as a concussion substitute. Australia all-rounder Moises Henriques, however, did wonder if it was a like-for-like replacement.