Defending champions ATK Mohun Bagan will face Kerala Blasters FC to kickstart the seventh season of ISL on November 20 at the GMC Stadium, Bambolim in Goa. 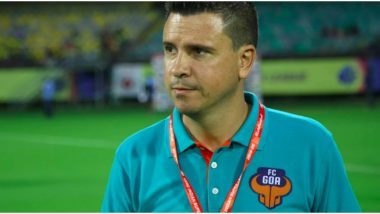 Panaji, November 17: Mumbai City FC head coach Sergio Lobera on Tuesday admitted that staying inside a bio-bubble 'isn't easy' but the newly appointed manager is embracing the 'big challenge' as the club gears up for the seventh season of Indian Super League (ISL).

Defending champions ATK Mohun Bagan will face Kerala Blasters FC to kickstart the seventh season of ISL on November 20 at the GMC Stadium, Bambolim in Goa. Mumbai City FC will lock horns with Northeast United FC in their opening game on November 21 and the coach said one must adapt quickly in these conditions to taste success. Also Read | Croatia vs Portugal, UEFA Nations League 2020-21: Check Out the Predicted Line-Ups for CRO vs POR Clash at Stadion Poljud.

"I am very happy to be a part of Mumbai City FC and I am very excited about the upcoming ISL. We need to work in a short time and prepare it isn't easy like quarantine and some players arrive later and this is a challenge we have to adapt quickly without any complain," Lobera said in a virtual press conference.

"We are a family, we have to spend a lot of time together. We need to work together in a bubble, so it's very important that we live as a family. Till now I am very happy with the situation and very confident and positive for the future because living in a bubble is not easy and we have to work hard," he added.

New entrants SC East Bengal will make their ISL debut playing in one of the oldest rivalries in Asian football - the Kolkata Derby.

For the first time in ISL, SC East Bengal will face ATK Mohun Bagan in the biggest spectacle of Indian football on November 27, at the Tilak Maidan Stadium.

"ISL is improving a lot in a short time and it's good to play against new teams such as East Bengal and other clubs. This season we are also playing against a virus, so it's very important to stay safe and healthy," said Mumbai City FC coach.

"This season the success will depend on how the teams can easily adapt to the situations. There will be good and bad moments and we need to work together as a family," Lobera added. Also Read | CRO vs POR Dream11 Prediction in UEFA Nations League 2020-21: Tips to Pick Best Team for Croatia vs Portugal Football Match.

The Spaniard, who has a wealth of coaching experience in leagues around the world in a career spanning almost 25 years, feels his main job is to improve the level of players.

"You have to carry the whole squad as with 11 players you can win a game but not a league. My job as a coach is to improve the level of players (tactically, physically, and mentally). So the most important thing is to manage well a group," said Lobera.