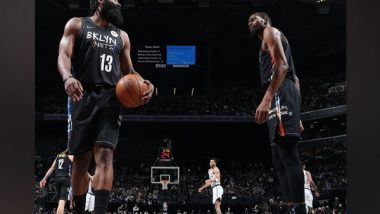 Brooklyn, June 6: Brooklyn Nets' Kevin Durant has come out in full support of his teammate James Harden who exited Game 1 of the Eastern Conference Semifinals against Milwaukee Bucks with a hamstring injury in the opening minute of the game.

Harden appeared to injure his hamstring on the first drive of the game in the opening quarter, heading straight back to the locker room, before being ruled out for the remainder of the game.

"James Harden (right hamstring) is out for the remainder of tonight's game," tweeted the Brooklyn Nets. According to the TNT broadcast, Harden soon left the arena to undergo an MRI.

The former MVP, James Harden has already missed 21 games this season due to the hamstring injury, including 18 straight games between April 7 to May 11.

The 31-year-old was crucial in the Nets' first-round series against the Boston Celtics, averaging 27.8 points, 10.6 assists, and 7.2 rebounds per game. Brooklyn is currently leading the series 1-0 against Milwaukee Bucks after securing a 115-107 win last night. Kyrie Irving and Kevin Durant combined for 54 points against the Bucks.