Former Indian skipper Rahul Dravid recognises and knows what it takes to develop a system where all the budding cricketers are getting a fair chance to play and showcase their skills to the selectors. 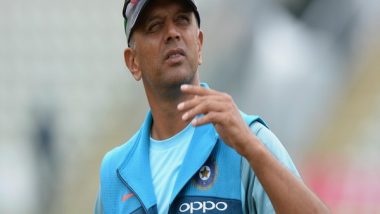 New Delhi [India], June 11 (ANI): Former Indian skipper Rahul Dravid recognises and knows what it takes to develop a system where all the budding cricketers are getting a fair chance to play and showcase their skills to the selectors.

The Director of Cricket Operations at the National Cricket Academy (NCA), Dravid stated that the focus still is not so much on winning as it is on developing players and managing workloads.

"I tell them upfront, if you come on an A tour with me, you will not leave here without playing a game," The Cricket Monthly quoted Dravid as saying.

"I've had that personal experience myself as a kid: going on an A tour and not getting an opportunity to play is terrible," the 48-year-old recalled. "You've done well, you scored 700-800 runs, you go, and you don't get a chance to show what you're good at. And then you're back to square one from the selectors' point of view because the next season you have to score those 800 runs again.

"It is not easy to do that, so there is no guarantee you'll get a chance again. So you tell people up front: this is the best 15 and we are playing them. This is not about the supposed best XI. At U-19, we make five-six changes between games if we can."

Dravid further shed the light on the knowledge in terms of fitness that players of this generation have with them in comparison to the 1990s and 2000s. The ICC Hall of Famer remembered how everywhere he went people used to talk to him of the passion for the game in India, of the sheer number of people playing in the streets and on the beaches.

"Playing on the beach and playing on the road doesn't make you a cricketer," he says. "It makes you someone who loves the game. That's what we had. We had a lot of people who loved the game. Unless you give that guy a proper matting wicket or a turf wicket unless you give him some half-decent coaching, some half-decent fitness assistance... where was all this in the 1990s and the 2000s? There was no access to it.

Dravid is set to coach the Shikhar Dhawan-led Indian team that will tour Sri Lanka for a white-ball series next month. The Men in Blue will play three ODIs and three T20Is against the hosts at the R Premadasa International Stadium in Colombo. The ODIs will take place on July 13, 16, and 18 while the T20Is will be played on July 21, 23, and 25. (ANI)