Martin Brathwaite is also back in the fold after overcoming a hamstring problem. 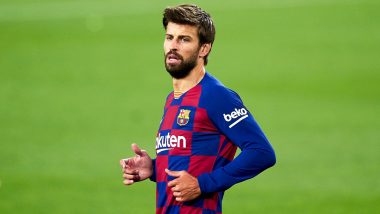 Barcelona, February 16: Gerard Pique has been included in the Barcelona squad for the Champions League tie against Paris Saint-Germain after recovering from a knee injury. Ronald Koeman has named the Spanish defender in his squad for the first leg of the last-16 clash with the French champions.

Pique was out of action with a cruciate knee ligament issue since November, but he was able to return to training with the first team at the start of the week. Martin Brathwaite is also back in the fold after overcoming a hamstring problem.

"Gerard Pique and Braithwaite have been discharged. The Barca centre-back has been called 87 days after injuring himself against Atletico Madrid at Wanda Metropolitano," Barcelona said in a statement. RB Leipzig vs Liverpool, UEFA Champions League Live Streaming Online: Where To Watch UCL 2020–21 Round of 16 Match Live Telecast on TV & Free Football Score Updates in Indian Time?.

"Thus, the Barca centre-back has already overcome the grade three sprain in the lateral ligament internal injury and the partial injury to the anterior cruciate ligament of the right knee that he suffered last November," it added.

The veteran defender has sat out 14 La Liga fixtures since then, including last weekend's 5-1 win over Alaves, leaving Koeman with only Samuel Umtiti, Clement Lenglet and Ronald Araujo to call upon at centre-back. Barcelona will host PSG in the Champion League clash at Camp Nou on Wednesday.