With just seven days to go for the World Test Championship (WTC) final, Team India is leaving no stone unturned to gear up for the summit clash against New Zealand. 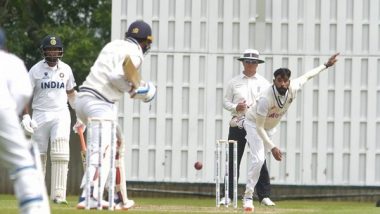 Southampton [UK], June 11 (ANI): With just seven days to go for the World Test Championship (WTC) final, Team India is leaving no stone unturned to gear up for the summit clash against New Zealand.

India and New Zealand will lock horns in the finals of the WTC at the Ageas Bowl in Southampton from June 18.

As a part of their preparation, Team India is currently playing an intra-squad match to get into the groove ahead of the WTC final.

The Board of Control for Cricket in India (BCCI) on Friday shared a couple of pictures from the set-up in which players were seen toling hard while playing the match.

"Snapshots from the first session of our intra-squad match simulation here in Southampton," BCCI tweeted.

Virat Kohli and boys' preparations are in full swing for the WTC final. The BCCI had earlier on Thursday shared a glimpse from the "high intensity" training session of Team India.

The Indian cricket team had landed in Southampton on June 3 and after that, every member of the touring contingent underwent three-day mandatory quarantine. At the Hampshire Bowl, the players were tested again before commencing a period of managed isolation. Regular tests will be conducted during the period of isolation.

Prior to departing for England, India head coach Ravi Shastri had said that going ahead, the International Cricket Council (ICC) should look to make the final of the WTC a best-of-three contest and it could be played like a three-match series.

Meanwhile, the New Zealand team is already in the UK for their bilateral series against England and the team will move from the ECB bio-secure environment into the WTC Final bubble on June 15 and will be subject to regular testing prior to and post-arrival in Southampton. (ANI)