The three-match Test series between South Africa and Australia, which was postponed in March 2021 due to COVID-19, has now been replaced by five ODIs and three T20Is. 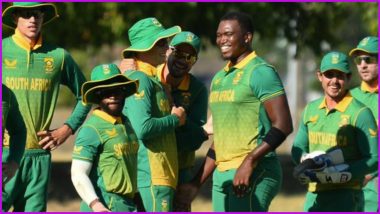 Cape Town [South Africa], May 11 : The three-match Test series between South Africa and Australia, which was postponed in March 2021 due to COVID-19, has now been replaced by five ODIs and three T20Is. South Africa will host Australia for eight white-ball matches, in August 2023, in order to prepare for the 2023 ODI World Cup.  GT vs LSG, IPL 2022: Hardik Pandya Is Proud of His Teammates As Gujarat Qualify for Playoffs.

According to ESPNcricinfo, Cricket South Africa is not expected to lose any money as a result of the change. Though seven fewer days of cricket will be played now, the white-ball fixtures will make an equal amount of revenue for CSA as the three Tests would have, which is why it has agreed to the change. Reportedly, Cricket Australia was initially looking at August 2023 as a window to reschedule the Tests, but because these matches are not part of the ongoing World Test Championship cycle, they agreed on them being replaced by white-ball matches.  IPL 2022 Playoffs Scenario: 3 Likely Teams That Will Join Gujarat Titans in the Final Four.

South Africa will also travel to Australia in late 2022 for their first festive Test series since 2008, with three matches due to be played in Brisbane, Melbourne and Sydney. Both the teams have not played against each other in Tests since the Sandpapergate series in South Africa in 2018.