GT vs LSG, IPL 2022: Hardik Pandya Is Proud of His Teammates As Gujarat Qualify for Playoffs

Gujarat Titans skipper Hardik Pandya praised his players for making it to the IPL 2022 playoffs in their debut year and said he was really proud of his boys. 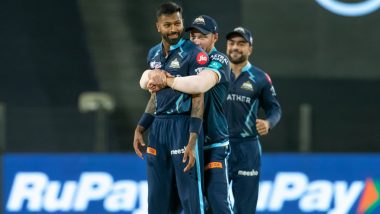 Pune, May 11 : Gujarat Titans skipper Hardik Pandya praised his players for making it to the IPL 2022 playoffs in their debut year and said he was really proud of his boys. Gujarat Titans came up with a brilliant bowling performance after Shubman Gill had struck a fighting unbeaten 63 to help them post a below-par 144/4 in 20 overs. Leg-spinner Rashid Khan then claimed 4/24 to lead a clinical effort by the bowling unit that dismissed Lucknow Super Giants for 82 in 13.5 overs to help Gujarat Titans win by 62 runs and become the first team to qualify for the playoffs. GT vs LSG Stat Highlights, IPL 2022: Rashid Khan, Shubman Gill Help Gujarat Titans Qualify for Playoffs.

"Really proud of the boys. When we started this journey together, we obviously believed in ourselves, but before the 14th game to have qualified, it's a great effort and really proud of us," he said at the post-match presentation on Tuesday. Pandya said his boys learned a lot from their narrow 5-run loss to bottom team Mumbai Indians. "Last game, I spoke to the boys before going, I think, that, that game was already over before it was over. That was a learning which we took. I think in all the games that we've won, we were always under pressure. The last game was the only game that we were ahead of the game and we knew the kind of batters we have and we'll finish it off. But it did not happen. That was the talk of the group. Gujarat Titans vs Lucknow Super Giants IPL 2022: 3 Reasons Why LSG Lost.

"Even in this game when they were eight down, I said, 'Let's be ruthless. This game is beautiful. If it's not over, it's not over. So let's make sure that we finish it. If they're down, let's keep them down, get this done and relax post-game," Pandya said. He praised his batters especially Shubman Gill for helping them reach a total that they could defend. "The way everyone batted, especially Shubman, I felt with 145 we were in the game. Their bowling, I think they were a little too short. A little fuller length was working. So that was the chat in the group as well. The only two shots they can score runs are cover drive, if you bowl really full, or if you give width. The bowlers did everything they're supposed to do and we ticked all the boxes," he said.

(The above story first appeared on LatestLY on May 11, 2022 11:48 AM IST. For more news and updates on politics, world, sports, entertainment and lifestyle, log on to our website latestly.com).