Shubman Gill is enjoying the best form of his cricket career. He smashed his 4th ODI century in the IND vs NZ 3rd ODI at Indore. The young Indian batter also completed 2000 runs in international cricket. 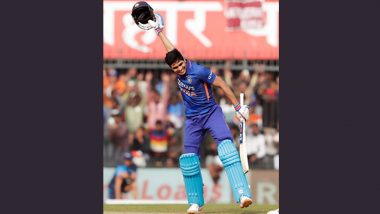 Indore (Madhya Pradesh) [India], January 24 (ANI): Indian opener Shubman Gill crossed the 2,000 run mark in international cricket on Tuesday. The 23-year-old batter achieved this milestone during India's third and final ODI of the series against New Zealand at Holkar Stadium in Indore. Gill continued with his consistency, making the best of every opportunity he has received as an opener. He smashed 112 runs in just 78 balls. His knock consisted of 13 fours and five sixes. His innings came at a strike rate of 143.58. Shubman Gill Equals Babar Azam's Record of Most Runs Scored in a Three-Match ODI Series, Achieves Feat During IND vs NZ 3rd ODI 2023.

Now in 37 matches, across 49 innings, Gill has scored 2,048 runs at an average of 47.62. He has five centuries and nine fifties in international cricket with the best individual score of 208.

In Test cricket, Gill has scored 736 runs in 13 matches across 25 innings at an average of 32.00. He has one century and four half-centuries in the format, with the best score of 110.

Gill has scored 1,254 runs in 21 ODIs and an equal number of innings at an average of 73.76. He has scored four centuries and five half-centuries in the format, with the best score of 208.

In this match, the 23-year-old batter added another record to his list, becoming the Indian with the most number of runs in a three-match ODI series. Rishabh Pant Only Indian Included in ICC Men's Test Team of the Year 2022; Ben Stokes Named Captain.

Gill ended the three-match ODI series against the Kiwis with 360 runs in three matches at an average of 180. He has two centuries in this series, with the best score of 208.

Previously, Virat Kohli had smashed the most runs by an Indian in an ODI series. He had recently scored 283 runs in three-match ODI series against Sri Lanka, which also included two centuries and a best of 166.

Gill is equal to Pakistan skipper Babar Azam, who also scored 360 runs in a three-match ODI series against West Indies in 2016, smashing a century in each match.

Coming to the match, India's innings is currently in progress. New Zealand won the toss and elected to field first. Opener Shubman Gill (112) and Rohit (101) put on a stand of 222 runs. Following this, New Zealand made a comeback in the match, by taking five wickets in regular intervals.

India is currently leading the three-match series by 2-0. (ANI)