Get latest articles and stories on Sports at LatestLY. Former Indian batter Virender Sehwag recalled how former skipper and legendary spinner Anil Kumble revived his test career after being dropped in 2007. 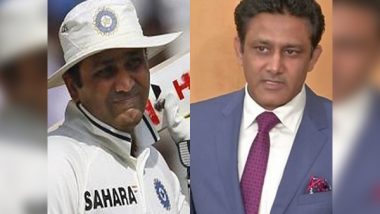 With a Test career average of almost 50 at an enviable 75+ strike rate, Virender Sehwag never imagined he could be dropped from the Indian Test team. But after playing his 52nd Test in January 2007, Sehwag played his 53rd after a year in Australia.

"Suddenly, I realised I was not part of the Test side; it hurt," admitted Sehwag on the upcoming episode of Home of Heroes on Sports18. "I would have ended with 10,000-plus Test runs had I not been dropped for that period."

For the first time since April 2007, Sehwag's inclusion in the Test team for the 2007-08 Australia tour for the Border-Gavaskar trophy surprised many. Picked on a gut by skipper Anil Kumble, Sehwag, though, did not start the first two Tests that India lost.

Also Read | IPL 2022: Ravichandran Ashwin Says, 'The Day I Lose My Passion for Experimentation, I Will Be Done With Game'.

Before the 3rd Test in Perth, the team travelled to Canberra for a practice match. "Score a 50 in this match, and you will be picked for the match in Perth," Sehwag remembers the words of his skipper. Sehwag scored a hundred before lunch in the match against ACT Invitation XI. As promised, Sehwag played in Perth, gave a good start at the top in both innings and took two wickets. But it was Adelaide when he announced his arrival, not in typical Sehwag fashion, though.

A 63 in the first innings was followed by an uncharacteristic but match-saving 151 in the second at Adelaide. "Those 60 runs were the toughest I scored in my life. I was playing to repay the faith Anil Bhai put in me," Sehwag recalls. "I did not want anyone to question him for bringing me to Australia."

What followed in the fourth innings was a Test-match batting masterclass by Sehwag. Despite losing partners, Sehwag was in his zone. "I was focused on the striker's end; on the other end, I spoke to the umpire, humming my favourite songs. The pressure was gone," Sehwag says of the 151 that kept Australia away from winning the last Test.

After the tour, Kumble made Sehwag a promise. "As long as I am the Test team captain, you will not be dropped from the side," Sehwag remembers Kumble saying. "That's what a player yearns for the most, the confidence of his captain. I got that from Ganguly in my initial years and from Kumble later," Sehwag says.

The Nawab of Najafgarh played seven Tests under Kumble averaging over 62 after the Australia tour. The Karnataka leg-spinner's stewardship brought out the best of Sehwag which included a career-best 319 against South Africa and 201* against Sri Lanka. Like an icing on the cake, Sehwag claimed his best bowling figures in a Test of 5/104 in Kumble's last Test as a captain and player both.

Sehwag's reverence for Kumble does not stop at picking him for the tour but for how he handled the controversies that headlined the second Test in Sydney. "If Anil Bhai had not been the captain, the tour would have discontinued and probably Harbhajan Singh's career would have ended too," Sehwag says. (ANI)