Former legendary Indian cricketer, Sachin Tendulkar on Tuesday revealed the advice that he gave to his son Arjun. 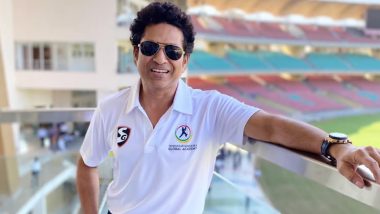 Mumbai (Maharashtra) [India], May 24: Former legendary Indian cricketer, Sachin Tendulkar on Tuesday revealed the advice that he gave to his son Arjun. Sachin, who was the mentor for five-time champions Mumbai Indians in IPL 2022, adviced Arjun to just focus on his game and not think much about the selection part of the team. Arjun Tendulkar Not Included in Mumbai Ranji Trophy Squad for Knockout Rounds.

Arjun Tendulkar, a left-arm medium-pacer, was bought by Mumbai Indians for Rs 30 lakh during the accelerated part of the Indian Premier League (IPL) mega auction but did not feature in any game in the IPL 2022. "He ( Arjun) should focus on his game and do not think about the selection part. I don't get involved in the selection process I leave that part to the management only," said Sachin Tendulkar on his Youtube video.  Lucknow Super Giants vs Royal Challengers Bangalore Betting Odds: Free Bet Odds, Predictions and Favourites in LSG vs RCB IPL 2022 Eliminator.

Mumbai Indians have had an extremely disappointing IPL season, with only four wins in 14 games. Rohit Sharma-led side remained at the bottom of the points tally with eight points. MI have given chances to players like Tim David, Ramandeep Singh, Sanjay Yadav and Mayank Markande during the last few games of their campaign. Talking about Tim David, Sachin said "He is not just a big hitter he can play all around the ground from cover area to sweeper area. In the game against Sun Risers Hyderabad in 18th over he hit 3 balls 3 sixes which shows his mindset and confidence in his ability." The Singaporean-Australian has played eight matches with a score of 186 runs and an average of 37.20. His knock of 34 runs in 11 balls against Delhi capitals provided Mumbai Indians with their fourth win in this IPL season.