India skipper Virat Kohli has said that winning the Test series in England will just be like winning a Test series anywhere else in the world. 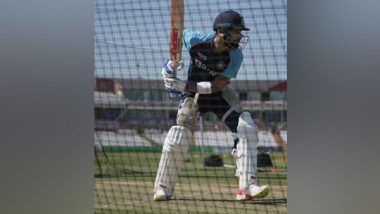 Nottingham [UK], August 2 (ANI): India skipper Virat Kohli has said that winning the Test series in England will just be like winning a Test series anywhere else in the world.

"It takes relentless madness and pursuit of excellence every day over a series of five Tests. To tell yourself that I want to do the hard work and I want to get in situations which are tough in every Test match every day. You have to be ready for that workload and that mental load," said Kohli during a interview to Dinesh Karthik on Sky Sports.

"For me, personally it means nothing more than winning a Test series anywhere in the world. For me, these things are not anecdotes or milestones in my career. For Indian cricket, it will be a huge thing but this culture is more dear to me. I will do everything in my ability, even if we lose a Test match, I want us to go for the win and not surrender and save a Test match. For me, that is not acceptable," he added.

In the first WTC cycle, New Zealand defeated India in the finals to win the Test mace. Lee believes that WTC has brought back the interest in the longest format of the game.

India had last won a Test series in 2007 under the leadership of Rahul Dravid and after that, the Men in Blue have struggled to get past the Three Lions on their own backyard. (ANI)