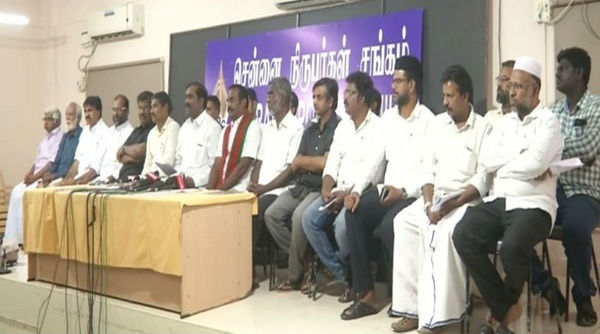 Leaders of Over 40 political parties and outfits gathered in Chennai. (Photo Credits: ANI)

Chennai, November 14: Over 40 political parties and organisations in Tamil Nadu have joined hands to oppose the Supreme Court's judgment ordering the construction of the Ram Temple in Ayodhya. On Wednesday the outfits including Tamizhaga Vazhvurimai Katchi (TVK), Viduthalai Chiruthaigal Katchi (VCK) and May 17 Movement announced the formation of an "anti-fascist coalition". Ayodhya Verdict: 'Didn't File Review to Avoid Deepening Social Divide', Says UP Sunni Central Waqf Board Chief Zafar Farooqui.

The coalition will stage a demonstration against the apex court's verdict in the decades-old Ramjanmabhumi-Babri Masjid land dispute case in Chennai on November 21. Anti-nuclear activist SP Udayakumar said the coalition "unequivocally condemned the judgement."

"Many political parties are taking a very hypocritical stand on this issue without realising that it will have an impact on all of us. We are appealing to the people not to take a bipartisan stand on this," Udhayakumar said. Another leader of the newly-formed coalition, Thirumurugan Gandhi, founder of May 17 Movement said: "We are coming together against the court's decision to giving permission to those people who demolished an old-age structure. "TVK leader T Velmurugan, MLA Thaniyarasu U and Vanniyarasu were among other leaders who participated in the meeting.