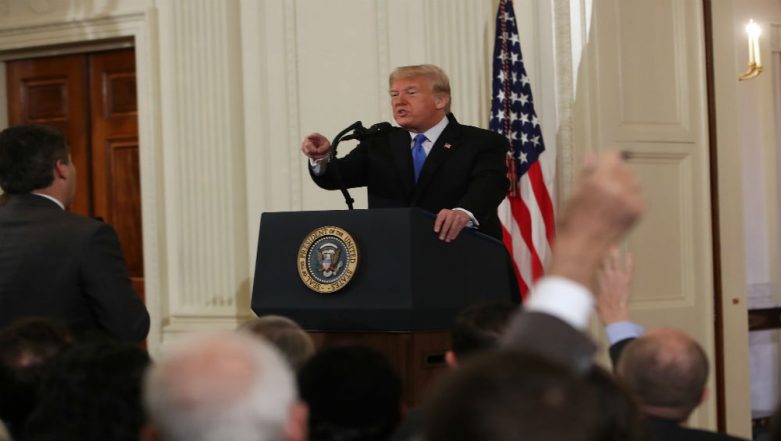 Washington, June 13: The United States President Donald Trump-led administration has taken a tough stand against Pakistan for its "unacceptable support" for terrorism in the region, said US Secretary of State Mike Pompeo. "Under President Trump, we have taken our defence cooperation to new heights solidifying our common vision in Indo Pacific and has taken a far tougher stand on Pakistan unacceptable support for terrorism," said Pompeo during India Ideas Summit here on Wednesday.

The remarks come days after Washington had announced that it has withdrawn its tax exemption programme for Pakistani diplomats. The US has already barred Pakistani diplomats working in Washington from travelling outside a 25-kilometre radius around the city without approval. Last year, Trump suspended USD 1.3 billion annual security aid which was given to Pakistan, condemning it over its inaction on the terrorism front. Donald Trump Says US Will Deploy 1,000 Additional Troops in Poland.

Focussing on India -US ties under Prime Minister Narendra Modi, Pompeo asserted that New Delhi and Washington have a unique opportunity to take advantage of it "special partnership". "When Prime Minister Narendra Modi visited the United States in 2017, President Trump and Modi shared few hugs and goodwill. PM Modi said it is in Indian interest lies in strong prosperous and successful America. In similar ways India's development and its growing role at the international level are in the United States of America's interest as well," he added.

Pompeo's visit will take place as the two countries get ready for a meeting between Modi and Trump during the G-20 Summit on June 28 and 29 in Osaka, Japan.Pompeo also said that the US is open for a dialogue to resolve trade differences with India. "It's a partnership of equals is how we see it. In my upcoming visit, we will probably discuss the GSP decision," Pompeo said.