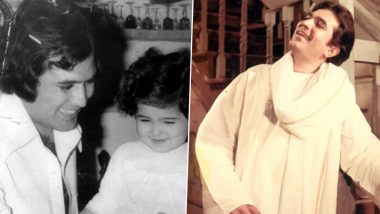 Bollywood actor and author Twinkle Khanna revisited her childhood memories on Tuesday and wished her late superstar father Rajesh Khanna a Happy Birthday. The 'Mrs. Funnybones' author, who shares her birthday with that of her father, took to Instagram on the occasion and posted images of the late megastar. She also posted excerpts from an elaborate article from the website of her digital media company 'Tweak'. Rajesh Khanna’s 78th Birth Anniversary: 6 Iconic Dialogues of the Anand Actor That Made Him Immortal

Posting excerpts from the same in her caption Twinkle wrote, "He told my mother that I was the best present she could have ever given him as I entered the world, feet first, on his 31st birthday." "He called me Tina Baba, never baby, and though I didn't realise it at that point, my upbringing was different from all the other young girls around me," she added. Rajesh Khanna was born on December 29, 1942, and was the first superstar of India. Rajesh Khanna Birth Anniversary: Manoj Kumar Remembers the Late Actor by Sharing a Classic Monochrome Photo With the Cine Legend

He entered Hindi cinema in 1965 when he began shooting for 'Raaz'. In the span of his career, he did 180 films, 163 feature films, and 17 short films. The actor was awarded India's third-highest civilian honor, Padma Bhushan for his contribution towards Hindi cinema. The actor passed away on July 18, 2012.