The experts said more efforts are needed to plug the loopholes in the infection control work. 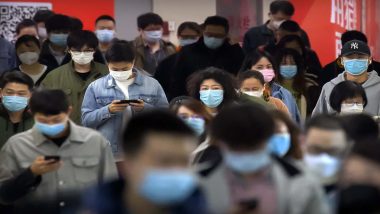 Beijing, August 1: As the new COVID-19 cases have been reported in at least 18 Chinese provinces, experts in the country have raised alarm due to the latest outbreak in the country fuelled by spread of Delta variant. Chinese public health officials on Sunday said that the ongoing outbreak is the most serious one since the initial outbreak in Wuhan, Global Times reported. The experts said more efforts are needed to plug the loopholes in the infection control work while stressing the need to advance the mass vaccination drive.

Epidemiologists in the country evaluated that the latest outbreaks are still in the early stages and insist that the situation is under control. Amid the recent resurgence of COVID-19 cases in some cities of central China, the country's top respiratory disease specialist has expressed concern over the latest outbreak in Zhangjiajie city. COVID-19 Outbreak in Nanjing: Coronavirus Continue to Spread in Chinese City; State Media Says Worst After Wuhan.

Zhangjiajie is a famous tourist destination in Hunan Province where at least eight confirmed cases were found as of Sunday, Global Times reported.

At an event on Saturday, top disease expert Zhong Nanshan said whether the epidemic in Zhangjiajie will further spread within the smaller city is still unknown. At least seven cities in five provinces, including Beijing, Sichuan, Liaoning and Jiangsu provinces found COVID-19 cases linked to the tourist destination. This chain of virus spread centred on Zhangjiajie was related to the infections at Nanjing Lukou Airport where it is confirmed to have been caused by the Delta variant. China Grapples With Sudden Surge of COVID-19 Cases in Beijing, Nanjing and 13 Other Cities.

"The arrival of Delta variant has upgraded the notion of close contact. Close contacts of a confirmed patient should also include people staying in the same space, same building and people who have been in contact within four days," Zhong further said. China on Sunday reported 75 new cases of confirmed infections. As on July 31, China's National Health Commission had received reports of 93,005 confirmed cases and 4,636 deaths in 31 provincial-level regions.