He will face Democratic incumbent Senator Cory Booker in the November elections. 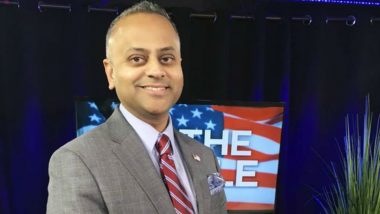 Washington, Jul 11: Entrepreneur Rik Mehta has become the first Indian-American to win the Republican primary for the Senate seat from the US state of New Jersey. He will face Democratic incumbent Senator Cory Booker in the November elections.

Mehta, a former US Food and Drug Administration (FDA) official, defeated his nearest rival Hirsh Singh, also an Indian-American, in the Republican, also known as the GOP (Grand Old Party), primaries held on July 7 by a margin of approximately 13,743 votes, according to preliminary results.

Counting of votes due to mail in ballots resulted in the delay in announcing the election results.

This is for the first time that a New Jersey Senatorial race will have candidates of colour nominees from both the parties. Booker, an African-American, won the Democratic primary with 89 per cent of the votes.

New Jersey, which has one of the highest concentrations of Indian-Americans, is considered to be a Democratic party bastion as it has been 48 years now that the State has elected a Republican as a Senator.

Both the Senate seats in the state are currently held by Democrats: Senator Robert Menendez, who is the Ranking Member of the Senate Foreign Relations Committee, and Senator Booker.

A biotech entrepreneur, innovator, healthcare policy expert and a licensed pharmacist and attorney, Mehta did his BS in pharmacy from Rutgers University, margin of and his Pharm.D from the University of Arkansas for Medical Sciences.