Import of shrimps in China from three Ecuadorian plants tested positive for COVID-19 thus prompting them to temporarily ban imports of the seafood. This finding has raised questions whether the pathogen can spread through food packaging or frozen products. 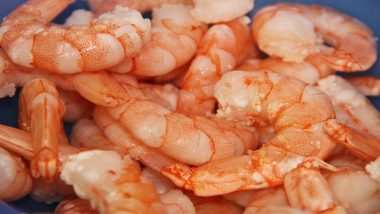 An import of shrimps in China from three Ecuadorian plants tested positive for COVID-19 thus prompting them to temporarily ban imports of the seafood. This finding has raised questions whether the pathogen can spread through food packaging or frozen products. The tests were conducted both the inside and outside of the shrimp packaging and the reports came positive. The imports from these Ecuadorian plants and also from the processors will be halted. This comes in after last month, imported salmon was said to be the possible reason for Beijing's new cases of coronavirus.

There is now increased scrutiny over the imports of refrigerated goods in the country. The samples were taken from the packaging of Whiteleg shrimp at the port cities of Dalian and Xiamen informed Bi Kexin, the  General Administration of Customs official. "The test result doesn’t mean the virus is contagious but reflects the loopholes in companies’ food safety regulations," he said stressing that there will be further control on the origins of the imported cold-food chain. Meanwhile, the Ecuadorian shrimp exporter has raised a doubt on the findings, calling it a blow to the industry's reputation. The shrimps that tested positive were delivered to ports in Dalian and Xiamen and have been destroyed.

Last month, a new cluster of domestic cases were reported in Beijing and the source was traced to the markets. It was reported that the virus was detected on chopping boards used to handle imported salmon. Following this major supermarket chains removed the stocks of the fish. There was a city-wide inspection of fresh and frozen meat, poultry and fish.

But there is little evidence to point if the virus can be transmitted through food. The U.S. Food and Drug Administration issued a fresh statement on the matter, saying there’s no evidence that Covid-19 is transmitted through food or food packaging. Bi also said customs authorities have conducted 220,000 test on food product samples and no other products showed traces of the virus. So there is no conclusive finding that was contagious.

(The above story first appeared on LatestLY on Jul 11, 2020 11:17 AM IST. For more news and updates on politics, world, sports, entertainment and lifestyle, log on to our website latestly.com).