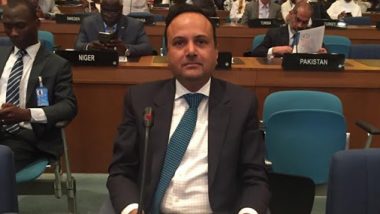 New Delhi, May 28: Amid the border stand-off with China in Eastern Ladakh, India said on Thursday that it remains committed to the maintenance of peace and tranquillity in the border areas and also remains firm in its resolve to ensure sovereignty and national security.

External Affairs Ministry spokesperson Anurag Srivastava said the two sides have established mechanisms both at military and diplomatic levels to resolve situations which may arise in border areas peacefully through dialogue and "continue to remain engaged through these channels." Also Read | Donald Trump Calls Coronavirus 'Very Bad Gift' From China After US COVID-19 Deaths Top 100,000.

"As conveyed last week, the Indian troops take a very responsible approach towards border management and strictly follow the procedures laid out in various bilateral agreements and protocols with China to resolve any issue that may arise in the border areas," he said.

"India is committed to the objective of maintenance of peace and tranquillity in the border areas with China and our armed forces scrupulously follow the consensus reached by our leaders and the guidance provided. At the same time, we remain firm in our resolve to ensuring India's sovereignty and national security," he added. Also Read | 115 New COVID-19 Cases Reported in Jammu and Kashmir: Live Breaking News Headlines & Coronavirus Updates, May 28, 2020.

Since 1993, India and China have signed several bilateral agreements and protocols to ensure peace and tranquillity in the India-China border areas.

Chinese Ambassador to India Sun Weidong had on Wednesday said the two countries pose no threat to each other and should resolve their differences through communication while not allowing them to overshadow bilateral relations.

India had last week termed as "inaccurate" any suggestion that its troops had undertaken activity across LAC in Western or Sikkim sector and said it is the Chinese side that has undertaken activity hindering India's normal patrolling patterns. The troops of the two countries are in a stand-off in Eastern Ladakh.

There was also a tense face-off between Indian and Chinese troops in north Sikkim earlier this month.