Get latest articles and stories on World at LatestLY. US Vice President Kamala Harris is scheduled to visit United Arab Emirates (UAE) on May 16 to lead a presidential delegation and offer condolences on behalf of the US administration and Americans on the demise of President Sheikh Khalifa Bin Zayed Al Nahyan. 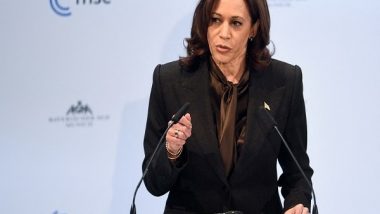 Washington [US], May 15 (ANI): US Vice President Kamala Harris is scheduled to visit United Arab Emirates (UAE) on May 16 to lead a presidential delegation and offer condolences on behalf of the US administration and Americans on the demise of President Sheikh Khalifa Bin Zayed Al Nahyan.

"Vice President Kamala Harris will travel to Abu Dhabi, the United Arab Emirates on May 16 to lead a Presidential Delegation and offer condolences on behalf of the Biden-Harris Administration and the American people on the passing of His Highness Sheikh Khalifa bin Zayed Al Nahyan," a statement by the White House read.

"She will meet with His Highness Sheikh Mohammed bin Zayed Al Nahyan, President of the United Arab Emirates. In addition to honouring the memory and the legacy of Sheikh Khalifa, the Vice President will underscore the strength of the partnership between our countries and our desire to further deepen our ties in the coming months and years," the statement added.

US President Joe Biden on Saturday also extended his regards to the ruler of Abu Dhabi Sheikh Mohammed bin Zayed Al Nahyan on being elected as the President of UAE and expressed his will to strengthen the bond between the two countries.

Biden said that UAE is an essential partner of the United States. The President recalled the newly appointed President Sheikh Mohammed for being at the "forefront" of the US-UAE partnership. "Sheikh Mohammed, whom I met with several times as Vice President when he was the Crown Prince of Abu Dhabi, has long been at the forefront of building this partnership," he continued.

The President said that he looks forward to working with Sheikh Mohammed to build from this "extraordinary foundation" to further strengthen the bonds between both countries and people.

The rulers of the United Arab Emirates' seven sheikhdoms made the decision at a meeting. It comes after the late President Khalifa bin Zayed Al Nahyan, who had been in office since 2004, died at the age of 73 after a long illness on Friday.

Newly elected President Sheikh Mohamed has previously served as the Deputy Supreme Commander of the UAE Armed Forces since January 2005. He is known for playing a key role in developing the UAE Armed Forces in terms of strategic planning, training, organisational structure and promoting defence capabilities. (ANI)