What Is the Monkeypox Virus? Here’s All You Need To Know About Smallpox-Like Disease Recently Reported in UK

The virus was first discovered in 1958 in a monkey research facility, while the first human case was detected in 1970 in Congo. 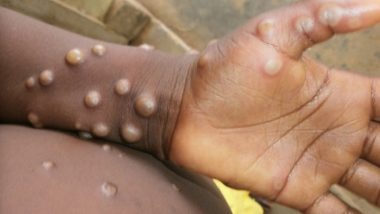 Mumbai, May 14: Two more Britishers were recently diagnosed with the rare monkeypox virus, the UK Health Authority confirmed on Saturday. According to the reports, both cases are family members. However, it is still not confirmed as to where and how they acquired the infection.

The monkeypox virus is an Orthopoxvirus, which is a genus of viruses that also includes the variola virus, which causes smallpox. The virus was first discovered in 1958 in a monkey research facility, while the first human case was detected in 1970 in Congo. Monkeypox Cases: Two More People Infected With Monkeypox in United Kingdom.

How Does Monkeypox Spread?

The infection can be spread when someone is in close contact with an infected person, however, there is a very low risk of transmission to the general population. It is classified under "zoonosis", a disease that is transmitted from infected animals to humans. According to CDC, monkeypox can also spread between people through respiratory droplets, or through contact with body fluids, monkeypox sores, or items that have been contaminated with fluids or sores.

According to the UK health authority, initial symptoms of monkeypox include fever, headache, muscle aches, backache, swollen lymph nodes, chills, and exhaustion. Rashes, often beginning on the face, further spreads across the body, especially the hands and feet. The rash changes and goes through different stages before finally forming a scab, which later falls off.

While there is no proven treatment against the virus, symptomatic care with fluids and antipyretics is found to be helpful for the monkeypox virus infection. According to reports, the virus takes 2 to 4 weeks to run its entire duration of symptoms.

Meanwhile, monkeypox is a rare viral infection that does not spread easily between people. It is usually a mild self-limiting illness and most people recover within a few weeks with the fatality rate close to 10%. However, severe illness can occur in some people.

(The above story first appeared on LatestLY on May 14, 2022 05:04 PM IST. For more news and updates on politics, world, sports, entertainment and lifestyle, log on to our website latestly.com).