In November last year, Sharif was allowed to travel abroad for his treatment, while Maryam had to stay behind “till further orders”. In May, a picture of Sharif having tea at a London cafe along with his family went viral on social media, sparking a debate on the seriousness of his health condition. 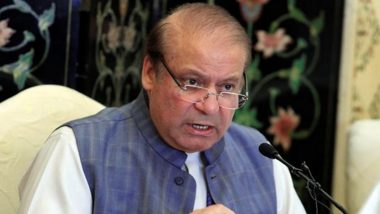 Islamabad, September 30: Pakistan Prime Minister Imran Khan has asked relevant authorities to take steps to bring back PML-N supremo Nawaz Sharif from London, where he has been staying since November 2019 on medical grounds, and to ensure that the former premier faces the corruption cases pending against him in various Pakistani courts, according to a media report.

The decision was taken at a Cabinet meeting on Tuesday, the Dawn News reported, quoting a Cabinet member whose identity was not revealed. Also Read | Alexander De Croo to Become Next Prime Minister of Belgium; Know All About The Flemish Liberal.

Khan asked the authorities to pursue the matter vigorously, the report said. According to the Cabinet member, the government had earlier sent a request to the British government for the Pakistan Muslim League-Nawaz (PML-N) leader's repatriation. However, it would again send a fresh application now. Also Read | Paris Explosion-Like Sound: Fighter Jet Breaking Sound Barrier Creates Panic Among People.

Besides a normal application, a formal request for his extradition would also be made. “Although we have no extradition treaty with the United Kingdom, wanted people can be repatriated under special arrangements as we had also handed over some people to the UK,” the member said.

The Islamabad High Court on Wednesday said that it needs to be determined if Sharif was evading court proceedings on purpose. The federal government told the court that the non-bailable arrest warrants issued for Sharif earlier this month were not received at his residence in London.

On September 15, the Islamabad High Court issued non-bailable arrest warrants for Sharif who failed to surrender before it despite clear warning by the bench. The court said the onus was on the federal government to bring back Sharif from London to stand a trial in Pakistan.

The PML-N had said it honoured the court decision, but the party supremo would return once his health permitted him. The three-time premier, his daughter Maryam and son-in-law Muhammad Safdar were convicted in the Avenfield properties case on July 6, 2018. Sharif was also sentenced to seven years in the Al-Azizia Steel Mills case in December 2018. But Sharif was bailed out in both cases and also allowed to go to London for medical treatment.

In November last year, Sharif was allowed to travel abroad for his treatment, while Maryam had to stay behind “till further orders”. In May, a picture of Sharif having tea at a London cafe along with his family went viral on social media, sparking a debate on the seriousness of his health condition.

The government came under further criticism when last month Sharif's photos surfaced online, showing him strolling in a street, prompting calls from within the ruling Pakistan Tehreek-i-Insaf (PTI) to bring him back.