Alexander De Croo to Become Next Prime Minister of Belgium; Know All About The Flemish Liberal 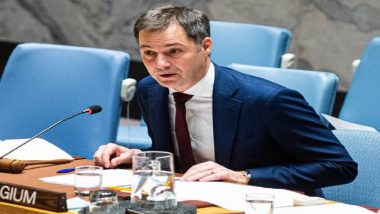 Brussels, September 30: Alexander De Croo is set to become Belgium’s new prime minister. Alexander De Croo will be sworn-in as the next PM of the country, 16 months after a parliamentary elections, on Thursday. De Croo is currently a care take finance minister of the country. He will lead the Belgium’s seven-party Vivaldi coalition of Flemish and Francophone socialists, liberals and greens.

De Croo will reportedly present the government's programme to Belgian lawmakers. He spearheaded the country’s fight against COVID-19 pandemic. He has been a federal minister since 2012 in the governments of Elio di Rupo and Charles Michel. Belgium: Protesters Rally in Brussels Against Mandatory Mask Use.

Who is Alexander De Croo?

Alexander De Croo is a Flemish liberal politician, economist and businessman. He currently holds the office of Deputy Prime Minister of Belgium and Minister of Finance and Development Cooperation. From 2009 until 2012, he was party leader of Open Flemish Liberals and Democrats. Alexander De Croo is the son of former Belgian minister and president of the Chamber of Representatives Herman De Croo. Coronavirus Outbreak: Belgium Toll Crosses 2,000, Deaths Mount to 37.

Before joining politics, De Croo became a project leader of The Boston Consulting Group in 1999. He participated for the first time in politics with the 2009 European elections. He received 47.779 preference votes. In the Michel II Government, Alexander De Croo succeeded Johan Van Overtveldt as Minister of Finance.

(The above story first appeared on LatestLY on Sep 30, 2020 04:48 PM IST. For more news and updates on politics, world, sports, entertainment and lifestyle, log on to our website latestly.com).