Prime Minister Imran Khan on Sunday expressed displeasure at the partial coronavirus lockdown imposed by the Sindh government against the wishes of his federal government and said that opting for such a measure means keeping people hungry. 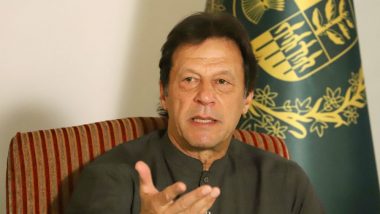 Islamabad, August 1: Prime Minister Imran Khan on Sunday expressed displeasure at the partial coronavirus lockdown imposed by the Sindh government against the wishes of his federal government and said that opting for such a measure means keeping people hungry.

Addressing the nation at the start of a live calls session from the public, he said that lockdowns always hit the poorest segment of the country. "We had a small problem between the federal government and Sindh," the PM admitted. "The Sindh government wanted to impose a lockdown, which is the correct decision and will curb the spread of the virus. Imran Khan Backtracks on His Rape Remarks, Pakistan PM Says 'Wouldn't Say Such a Stupid Thing'.

"But on the other hand, the thing to see is that will we be able to save the economy from the lockdown? Then there is the issue of hunger ... the daily wage earners and especially the poor section of our society ... how will they make ends meet during the lockdown?"

"The Sindh government should know that when you force a lockdown you are going to keep people hungry. You cannot keep hungry people under a lockdown if you do not have the resources to bring them food."

Khan's remarks came as Pakistan's coronavirus situation continued to worsen as the positivity rate was close to 9 per cent and the new cases crossed 5,000 for the first time after three months.

The national tally touched 1,034,837 after 5,026 new cases were reported which is the highest since 5,113 on 29 April, according to the Ministry of National Health Services.

The authorities were relying on vaccination, implementation of SoPs and smart lockdown to handle the spread of the virus during the fourth wave of the pandemic. Planning Minister Asad Umar tweeted that more than 30 million doses have been administered across the country. He also said a new record of doses per day was made.

“Pakistan has crossed 3 crore vaccinations. The first crore took 113 days. The second 28 days and the 3rd only 16 days. Pace has rapidly increased. All 6 days this week were a record. 9 lakh 34 thousand vaccinations yesterday. In last 6 days 5 million vaccinations were done,” he said.