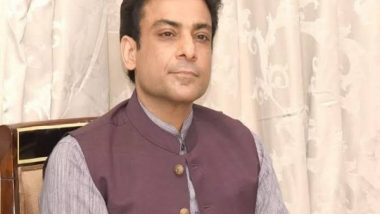 As per details, the LHC accepted Pakistan Tehreek-i-Insaf (PTI's) petitions against the Pakistan Muslim League-Nawaz (PML-N's) government in Punjab, reported The News International.

A five-member LHC bench headed by Justice Sadaqat Ali Khan announced the verdict with 4-1 on pleas filed by PTI against Hamza's election as CM.

Hamza was elected as chief minister of Punjab in a ruckus-marred session of the Punjab Assembly on April 16, 2022.

The PTI and PML-Q had challenged the election of Hamza Shahbaz in a chaotic session, reported The News International.

Ahead of the vote, three PTI members of the Punjab Assembly were arrested for attacking Deputy Speaker Dost Mohammad Mazari as the party boycotted the session to elect the new chief minister.

Hamza was elected as the new chief minister with 197 votes. While his opponent, Pervez Elahi did not receive any votes as his party and PTI had boycotted the polls.

The LHC order is likely to trigger a new crisis in the country's largest province as the PTI leaders have said that the CM election will be held again.

According to a report, the same candidates, Hamza Shahbaz and Pervez Elahi, will run for the position again. For the vote of confidence, the new CM must receive 186 votes or half of the House's total strength, reported The News International.

If the court restores the Punjab Assembly to the April 16 situation, the deputy speaker will oversee the CM election proceedings. If a no-confidence motion is filed against him, the proceedings will be presided over by a panel of chairmen.

In light of the Supreme Court's decision, the Election Commission of Pakistan has deposed 25 PTI defectors. By-elections for the 20 vacant seats will be held on July 17, and the campaign is well underway.

The provincial Election Commission has yet to notify two minority and three female members on the PTI's priority list of reserved seats.

At the time of the election for the CM's seat, 351 members will vote, with the remaining 20 members joining the assembly after the by-elections.

At present, the government alliance enjoys the support of 177 MPAs, including 160 of the PML-N (160), four independents, one Rah-e-Haq Party and seven of the PPP.

On the other hand, the PTI has 158 MPAs in the Punjab Assembly after 25 of its MPAs were de-seated.

Hence, the results of the by-elections will decide the future of both alliances. (ANI)