Elon Musk has elaborated on details of Tesla's new electric motor -- the Plaid carbon-wrapped motor -- and even teased an even crazier higher RPM version coming to the new Roadster. 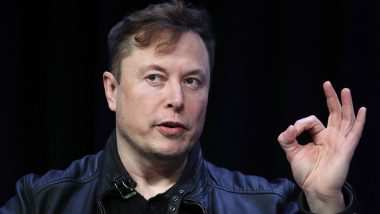 San Francisco: Elon Musk has elaborated on details of Tesla's new electric motor -- the Plaid carbon-wrapped motor -- and even teased an even crazier higher RPM version coming to the new Roadster. The CEO mentioned a brand-new battery pack without going into new details. However, he did unveil Tesla's new Plaid carbon-wrapped motor and discussed a few details about the new technology, which allows for smaller, more powerful and efficient motors. Tesla Model S Plaid Launched at Delivery Event in Fremont, Prices Start From $1,30,000.

During the presentation, Musk briefly touched on the fact that this new motor is only possible thanks to a new machine that Tesla developed to be able to build it. In a new series of tweets yesterday, the CEO elaborated on that machine:

"Fiber is wound over rotor at high tension load. Machine to do this was made by Tesla Automation. Carbon sleeve must put copper rotor in compression or it loosens at low temp due to differential thermal expansion. Preload is also helpful for maintaining precise gap to stator," the Tesla CEO said. "Main advantage of this is a much stronger EM field compared with a rotor that is held together by metal (usually high strength steel). Other advantage is that rotor can go to higher RPM, as carbon sleeve (mostly) stops copper rotor from expanding due to radial acceleration," Musk said.

Musk also expanded on the advantages of the new motor over its predecessors. In short, the new carbon-wrapped rotor enables Tesla to push its new motors to a higher level of performance. Again in the same series of tweets, Musk claimed that Tesla's new motor is "arguably the most advanced motor on Earth," but he teased that the automaker is working on something even more powerful for the new Roadster.

"The Plaid carbon-wrapped motor is arguably the most advanced motor on Earth outside of maybe a lab somewhere. We have to keep some secrets! We have a few ideas for increasing torque and max rpm even further for new Roadster. Definitely fun & exciting engineering ahead!"

Previously, Musk had discussed Tesla using the same tri-motor powertrain found in the new Model S for the new Roadster, which could achieve greater performance based on the smaller form factor alone, but now it looks like Tesla could be improving the powertrain technology, too. The CEO has recently said that the engineering of the new Tesla Roadster will be completed this year to enter production in 2022. Tesla is supposed to have new engineering prototypes of the new electric hypercar this summer.

(The above story first appeared on LatestLY on Jun 15, 2021 06:06 PM IST. For more news and updates on politics, world, sports, entertainment and lifestyle, log on to our website latestly.com).