Kris James Unveils a New Lean Physique After Working With His Celebrity Trainer, Michael Baah, Ahead of New Single Launch 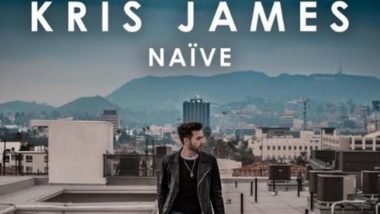 He dominated the airwaves with his single "get back to love" which led the Liverpool singer-songwriter to grace the much-coveted billboard spot in New York's Times Square with his good looks and fashionable know-how– basically every musician’s dream!

Kris stunned fans with a lean, more chiseled physique at an L.A. pool party, and revealed that since working with his personal trainer, Michael Baah he has gained some muscle and is feeling the best he has ever felt! We agree, Kris looked incredible on the cover of his new single, Naive which was released on the 5th of June.

Naive was co-written by Kris with Stewart Boyle, who collaborated with Kris on his previous single Get Back To Love, which has notched up 100,000 streams in the UK since its release last October.

In order to achieve the right physicality and mindset to create hits, Kris brought out his own secret weapon: long-time trainer Michael Baah. Since being introduced in celebrity circles the two have become legitimate training partners, doing regular sessions in Kris's well-equipped home gym in London.

Michael used his own boxing style background to create a program that would help fill out Kris's chest, shoulders and arms. “I used complex fundamental movements, like dumbbell bench presses that would help with separation. Compound exercises that work multiple muscle groups at the same time, alongside body weight training and speed rope,” he says. Once they had the process down, it was just about dialing up the weight. “Kris hit the point where he was pressing more than he ever thought he could do"

Artists & Actors often don’t get credit for what they actually do physically, because when you see a movie/clip, you see three seconds of the stunt and you don’t realize it took three weeks of 12-hour days for them to actually shoot it. Where an athlete has a 90-minute game and then they rest for two days, an actor has that same intensity, but they do it for 20 minutes every hour for 12 hours, and then they have to do it again the next day.”

The producers & agencies I've worked with over the years know that they can count on me. We recently had an actor who had completed the whole main part of the shoot, and then he’d been off for three months, and then they had to do reshoots. The producer said to me, ‘He has four weeks to lose 20 pounds and get back to looking like he did during principal photography.’ I can pull it together and rush it—but I will educate the producers that if we had more time, I could have really done it [so they] don’t just look the part, but they can do more of their own stunts and have more longevity. at the end of the day it's the long term health of lifestyle that I am looking after in my clients”

Kris is amazing to work with! He is a fun, positive guy with enough drive to power a small tank! That's really inspiring to be around and rhat's why we get a lot done week in week out!

Kris is set to release his debut album, called The Highs And Lows Of Love And Life, later this year. "All the songs are about getting through life – when you’re happy, sad, in love, out of love," he told us. "I want to write about things that people believe in.

Kris say's "Every song is being treated like a potential single, so they’re taking months to complete. That way, if it’s the only album I ever make, at least I’ll be happy for the rest of my life."