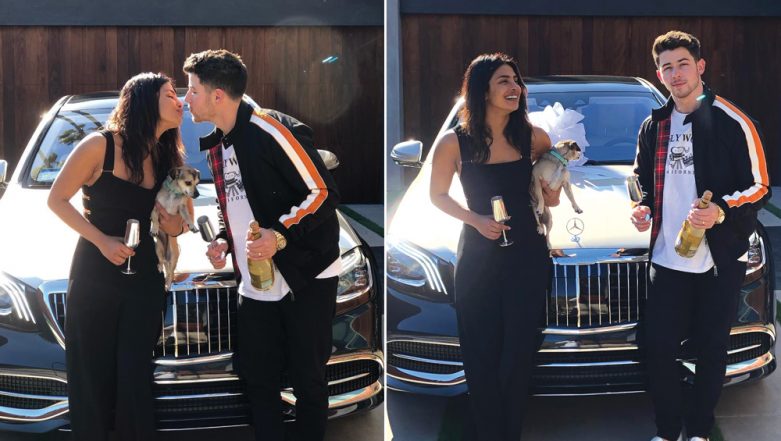 Los Angeles, March 13: With "Sucker" reaching the top spot on the US Billboard, pop singer Nick Jonas gifted his actress-wife Priyanka Chopra Jonas a luxurious black Maybach. It is reportedly priced at $200k (around 1.4 crore rupees) Priyanka posted two photographs of herself along with Nick.

In the first image, the couple are seen sharing a kiss in front of the car. In the second one the couple is holding champagne flutes in one hand and Priyanka is holding her dog Diana, in her other arm. "When the hubby goes number one.. the wifey gets a Maybach! Introducing... Extra Chopra Jonas. haha. I love you baby! Yay! Best husband ever -- Nick Jonas," she captioned.

When the hubby goes number one.. the wifey gets a @maybach !! Introducing.. Extra Chopra Jonas.. haha .. I love you baby!! Yaaay! Best husband ever.. @nickjonas 😍❤️💋

According to billboard.com, The trio (Nick, Kevin and Joe) had previously reached a number 5 high with "Burnin' Up" in 2008. The "Sucker" video was unveiled earlier this month and the couple featured in it along with the extended Jonas clan.

It also features Kevin and his spouse Danielle, as well as Joe and his fiancee and "Game Of Thrones" star Sophie Turner in the over three-minute video. Jonas Brothers' band was formed in 2005. The band has created hits like "Burnin' up", "Hold on" and "Fly with me". The Jonas Brothers split up in 2013.